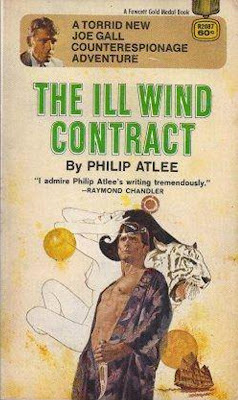 Recently there was some discussion about the Joe Gall series on one of the Facebook groups I belong to, and since I hadn't read one of the books in a long time I figured that would be a good excuse to do so. For those of you unfamiliar with the series, which has been out of print for quite a while now, Joe Gall is a former pilot who knocked around the Far East after World War II, had some adventures there (one of which is the basis for PAGODA, the actual first book in the series), and eventually became an agent for the CIA. Between missions he spends time at his isolated home in the Ozark Mountains.
THE ILL WIND CONTRACT, published in 1969, finds Joe being sent to Indonesia, with a stopover in Japan first, to find out why an Indonesian army officer is trying to recruit an American mercenary. That's how it starts out. After that . . . well . . .
I've read about half of the Joe Gall novels, and one thing is consistent in all of those: the plots never make sense to me. Maybe I'm just dense. At first this one seems to be about some sort of new wonder drug that makes people either super-smart or super-dumb (I was never sure which), which would make it fit right in with the Sixties secret agent boom which produced James Bond, The Man From U.N.C.L.E., Our Man Flint, etc. But then that part of the plot goes away and the book reads like it's going to turn into an Indiana Jones-style adventure as Joe tries to retrieve a fortune in gold and silver bullion that's hidden in an ancient temple. Suddenly, though, civil war breaks out in Indonesia (a development based on actual events), and Joe is caught in the middle of it. Characters and storylines are introduced and then promptly discarded (or forgotten). And this is one of the more coherent novels in the series, as author Philip Atlee (really James Atlee Phillips) at least makes an attempt to tie everything together in the end.
So given all that, is this book actually worth reading? Well, yeah. Definitely. Joe Gall can be unlikable at times, but he's an interesting protagonist/narrator. The action scenes are pretty good, the local color is excellent, and Phillips wrote terse, hardboiled, at times lyrical prose that's very effective. I don't know if the messiness of his plots was a deliberate attempt to capture the murky world of international espionage or if he just couldn't keep up with what he was writing. Somehow, though, it all works fairly well. I suspect that somebody will reprint these as e-books one of these days. In the meantime, copies of the original paperbacks are readily available on-line and not expensive, and they still show up in used bookstores. (I bought this one from Half Price Books' nostalgia section for a dollar.) The series can be read in any order, although the books sometimes refer back to previous entries, so if you run across any of them and have never made Joe Gall's acquaintance, give 'em a try.
Posted by James Reasoner at 6:00 AM

I still remember buying THE GREEN WOUND from the blind newsie who had a stand and a big twirling paperback rack in the post office in Corsicana, Texas. I loved the book. I later bought THE SILKEN BARONESS, and that was when I first realized that the plots didn't make much sense. Didn't matter, though. I bought and read each of the books after that as they appeared. Something about the writing and the character, I guess.

I bought one (forget which one at this point), read the first fifty pages and tossed it. For some reason I just couldn't get into the plot. I never bought another Phillip Atlee novel.

THE GREEN WOUND is also, as far as I know, the only novel of international intrigue set partially in Waco, Texas.

I read several of them, including THE STAR RUBY CONTRACT. Gall loses his right forefinger in that one. Somehow it mysteriously grew back. :)

I think I have Star Ruby and Canadian Bomber. I read Bomber and never got to Star Ruby. Entertaining, but I think I'm liking Matt Helm a lot more...

Never even heard of this. I need to check it out.

Long, long ago I wrote an article about the Joe Gall series. Thanks to the wonderful Steve Lewis, it can be found at: http://mysteryfile.com/blog/?p=827

I read all of the Gall novels up until THE WHITE WOLVERINE CONTRACT at the end of 1971. I kept them for many years, weeded them out a couple of years ago when I tried to re-read a couple and couldn't work up a lot of interest. THE TREMBLING EARTH CONTRACT (the one in which Gall has his skin artifically darkened so that he can pose as a black ex-con to infiltrate a radical group), lingers in my mind as a pretty good entry. It ended on a cliffhanger that Atlee pretty much ignored in the next book. I'm surprised to see that Atlee kept the series going for nine more installments after I bailed out.

Woops, I should have said "... through THE WHITE WOLVERINE CONTRACT." And I should credit George's blog as the source for the number of Gall titles after 1971 that I didn't read.

I read The Ill Will Contract last year and remember it had a high body county. The other thing I saw was the Chandler blurb on the front cover. Did Chandler write it for the series? Good review and discussion. Thanks, James.

George Kelley gives a good review of the series on the blog MYSTERY FILE. As he points out above: http://mysteryfile.com/blog/?p=827

The Chandler blurb is sort of a cheat, since he was talking about one of the author's earlier books and actually said that he admired James Atlee Phillips' writing. It wasn't in reference to the Joe Gall series. But the comment's vague enough I don't blame the publisher for using it.

My experience with Joe Gall was one of such unintended camp and incoherent storytelling that I can't see going back.
When it comes to pulp I'm pretty damn omnivorous, but when the story degenerates beyond a minimalist chain-of-events plot to the level of the author free-associating-and-never-following-through I can't stick with it.

There was a very memorable scene in one of the Gall titles that reads as high camp today. Our very studly (by his own admission) hero is having an amazingly sustained carnal interlude with one of his girlfriends, and he credits his superhuman staying power to this ultra-exotic foreign herb he's been taking. After a few paragraphs he reveals the name of this rare, ultra-volatile male-miracle. It was.... (wait for it)...ginseng.
I set the book down, looked over to where my ginseng tea was steeping, and laughed my ass off.

Oh, and I thought it was the bad translations.