Bruce Minney: The Man Who Painted Everything - Thomas Ziegler

As some of you know, I've developed an interest lately in the men's adventure magazines of the Fifties and Sixties, even joining the Facebook group devoted to them. There's also an excellent blog about them run by Bob Deis, the founder of the Facebook group. (The scans that accompany this post come from Bob's blog.) These publications, with titles like FOR MEN ONLY, MALE, and STAG, always fascinated me as a kid when I saw them on the magazine racks while I was buying my comic books, probably because they were forbidden fruit. My mother already had enough of a dislike for me reading comics. If she'd caught me with my nose in an issue of FOR MEN ONLY with a racy cover, she would have pitched a conniption fit and that magazine would have been in the garbage faster than you can say, "Smut".
Now, of course, I can read whatever I want to, but the magazines that would have cost me a couple of quarters back in 1968 now fetch considerably more than that on eBay. Even so, I've picked up a few of them and will probably buy more once I've read the ones I have.
In the meantime, that Facebook group I mentioned above has been an education, as well as being highly entertaining. For example, I'd never heard of Bruce Minney, although I was familiar with his work without really being aware of it. (I'll get to that.) From the mid-Fifties through the early Seventies, Minney was a prolific artist for the men's adventure magazines, providing scores of cover paintings and interior illustrations. He painted rampaging elephants, runaway trains, aerial dogfights, gun battles, explosions, evil villains (many of them Nazis), stalwart heroes, and lots and lots of beautiful girls. If there was a way to work it into a cover painting that would catch a newsstand browser's eye and induce him to part with his quarters, Bruce Minney painted it.
Hence the title of this excellent new biography and appreciation of Bruce Minney's work by Thomas Ziegler, BRUCE MINNEY: THE MAN WHO PAINTED EVERYTHING.
Ziegler is in a good position to produce such a book, since he's Bruce Minney's son-in-law, but this volume doesn't whitewash the inevitable hills and valleys of a freelancer's career. It's a fascinating, well-written look behind the scenes of the men's adventure magazine industry, a large neglected sub-genre of popular fiction. (And despite the preponderance of magazines with "True" or "Real" in their titles, most of what was published in them actually was fiction.) 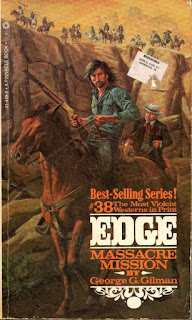 Ziegler doesn't stop with those magazines, however. He explores Minney's career as a fine artist and, of most interest to me, as a paperback cover artist. Until I saw all the cover reproductions in this book, I didn't realize he had painted the covers for so many books that I've read or at least owned during my life.
I bought the e-book edition of this one, read the text on my Kindle, and used the Kindle app on my computer to appreciate the hundreds of excellent color cover reproductions. A trade paperback edition will also be available soon. If you have an interest in the men's adventure magazines, paperback covers, cover art in general, or the life of a freelance artist, BRUCE MINNEY: THE MAN WHO PAINTED EVERYTHING gets the highest recommendation from me. It's one of the best books I've read this year.
Posted by James Reasoner at 6:00 AM

I collect original art so I'll have to get this biography on Bruce Minney.

There are a couple great books out that reprint the cover art from these magazines. Amazon.com has them under "mens adventure magazines". My theory is that these magazines were supported almost entirely by the WW II vets who got a kick out of the covers and stories showing Nazis partying with half nude girls. Meanwhile a tough GI lurks in the background read to gun them down.

Walker,
Bob Deis is putting together just such an anthology that's supposed to be out later this summer. I'll be sure to mention it here when it's available. As I mention in the post, I have a handful of issues so far and have read about half of one of them. One story was pretty good, one story was at least readable, and the others not so much. A lot of excellent authors contributed to these magazines, though, so I guess it's just a matter of finding the good stuff.

Will this be printed in book form? I don't have the Kindle fire so the illustrations won't show up in color. This is one I would prefer in the print format.

Yes, there will be a print edition. According to Bruce's Facebook page it's being proofed, so it should show up on Amazon relatively soon. I may get it, too, although I'm trying to cut back on buying print books because of space issues.

When I went to order the Bruce Minney book I saw it was only available on Kindle which is a deal killer for me. I'm holding the line at physical books only. If it does come out in a print copy please, by all means, let us know. I will certainly buy the print edition.

I've heard about the mens adventure anthology that is due out soon. I'm hoping there is more than the usual Ellison, Silverberg, Block work included. We all know these guys could write under the various pennames. But did anyone else?

I hope you also let us know about the anthology. I'll be looking for stacks of the mens adventure at PulpFest.

The military historian Robert F. Dorr, whose WW2 non-fiction I've been reading lately, wrote a ton of stories for the men's adventure magazines, some war-related, some not. I haven't read any of those stories yet, but I suspect they're very good. At least one of them will be in the anthology. The other authors you mention will be included, but I'm sure there'll be a lot of others as well.

I actually used to buy 'em for the stories. (But then, I read the interviews in Playboy too.) Devoured them in the 60s when I was in the service. Mario Puzo (as Mario Cleri) started there, and they often published tough guy PI stuff: Spillane, Avallone, condensing Carter Brown novels, etc. The one writer I really liked of that school, whose identity I could never uncover and i never read him anywhere else, was someone using the by-line "W.J. Saber" who used to regularly write "novel-length" PI and caper "book bonuses."

I've seen his work. Didn't know his name, though.

Steve,
"W.J. Saber" published one novel, THE DEVIOUS DEFECTOR, which came out from Banner Books in 1967, the same publisher and year as SIX GRAVES TO MUNICH by "Mario Cleri". I think there's at least a chance "Saber" was also Puzo. I just ordered a copy of it.

Steve,
My Puzo guess was 'way off. W.J. Saber was Warren J. Shanahan, who wrote for the men's adventure magazines under his own name, as well as having a few stories in the crime fiction digests. There's more information about him on the Mystery File blog: http://mysteryfile.com/blog/?p=403

Thanks! Now I know who to track down to see if he's as good as I remember from the barracks days. For my money you have the coolest (& the most generous) blog on the internet. Incidentally, my trade paperback edition of Fort Worth Nights is on its way. Great to see Cody back in action.

James, I hope you'll post an update when the print edition hits Amazon, et al. This looks like an absolute must-have.

Avram Davidson's CRIMES AND CHAOS was a collection of his men's magazine articles. Algis Budrys (who was also writing for the same magazines at the same time) was amazed that Davidson insisted on writing stories that were actually true and that he did a lot of research for each article.

How can I resist after such an enthusiastic review? I've just downloaded it.