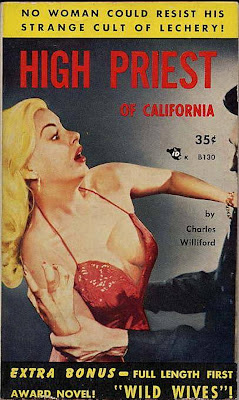 Charles Willeford is one of those writers whose work has been recommended to me many times over the years, but for some reason I've never read much of it. A few short stories, maybe. But I recently read his early novel WILD WIVES, and I can see why people like his writing. It's distinctive, to say the least.
This one starts like a typical private eye novel: the narrator, PI Jake Blake, lives in a San Francisco hotel and has his office there as well, on the mezzanine above the lobby. A couple of young women come into the office, one after the other. The first is an underage seductress with a gun; the second is a wild beauty in her twenties who wants Blake's help in escaping from the bodyguards/watchdogs her father has hired to follow her around.
The plot that Willeford spins out from this stereotypical set-up isn't really that complicated, although the reader needs to pay attention to small details because they usually turn out to be important later. What Willeford does, though, is to gradually turn most of the usual private eye novel clichés on their head, all the way to an ending that's very different from what you'd expect to find in a novel that starts out like this one does.
WILD WIVES is short, around 30,000 words, and although it was first published as half of a double volume with a reprint of Willeford's HIGH PRIEST OF CALIFORNIA, it's been reprinted by itself a number of times. It's fast-paced, the writing is an effective mix of oddball humor and graphic violence, and Jake Blake is an interesting, though not very likable, protagonist. I enjoyed this novel and definitely will read more by Willeford.
Posted by James Reasoner at 6:00 AM

It's available for the Kindle, along with four other novels in the same package.

I'll be adding it to the reading list..thanks for the heads up!

I really love that one, as I do all of Willeford's early work. He's one of the two or three writers of the paperback original era that really had a huge impact on me, especially BLACK MASS OF BROTHER SPRINGER.

Love his work but I have not read this one.

Willeford is a phenomenal writer. When reading just about all of his books (which I have), it is clear he really doesn't give a damn what anyone else thinks. His characters do the most outrageous things time after time. There is no formula. A lot of the details reflect Willeford's own life as a soldier and in odd jobs between his enlistments. If you're looking for a unique read, I highly recommend his novel "Cockfighter".