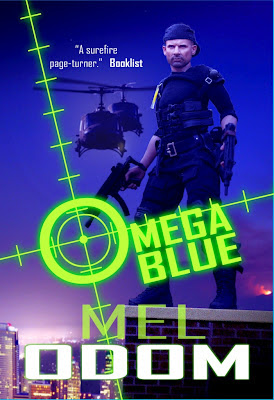 Set in the future a step past tomorrow, in a United States that's bleak and hard and crime runs rampant in the streets, there's only on team to call on. Omega Blue, the FBI's premiere hardcases take down crime too big or too dangerous for the average law enforcement agencies.

Tracking down a group of organ jackals dealing in the Red Market (organ harvesting), Slade Wilson goes head-to-head with an Asian gang sporting exo-skeletons and fighting to keep a secret agenda hidden from prying eyes. Equipped with state-of-the-art technology, driven to succeed, Wilson and his team of specialists keep the pedal to the metal as they race toward doomsday.

As I've come to expect from Mel Odom, this novel contains some of the best-written action scenes you'll ever come across, plus some great characters including a tough but very likable protagonist in Slade Wilson. Part near-future techno-thriller, part hardboiled crime yarn, OMEGA BLUE is a highly entertaining science fiction adventure novel. Originally published in the mid-Nineties, it has a welcome new life as an e-book, and I hope the sequel will be available soon because I want to read it, too. Highly recommended.