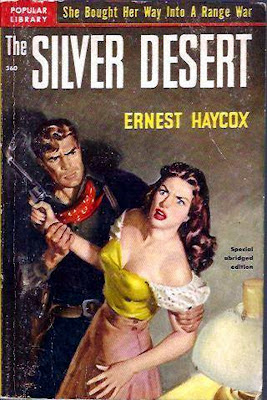 I've said some less than complimentary things about Ernest Haycox's work in the past, but I think maybe I'm finally starting to develop an appreciation for it. Earlier this year I enjoyed his collection of pulp yarns TRIGGER TRIO, and now I've read one of his full-length novels, THE SILVER DESERT, and liked it quite a bit, too.
This is a modern-day Western, set in the mid-Thirties, the same time it was originally serialized in the slick magazine COLLIER'S, weekly from mid-August through mid-October, 1935. It begins with beautiful young actress Lily Tennant arriving in Nevada, where she immediately encounters embattled rancher Tom Sebastian, owner of the vast Barrier spread. Lily is on the verge of a career breakthrough in Hollywood but is no longer sure she wants it. Tom is trying to defend his ranch against rustlers led by his old enemy Buffalo Galt, who is backed by some shadowy political powers. Naturally Tom and Lily fall for each other, but there are all sorts of complications keeping them from getting together, ranging from gunfights to romantic triangles.
Ernest Haycox in credited with bringing realism to Western fiction, which in this case consists of a lot of angst, most of it centered around a beautiful young woman named Charm who lives on Tom's ranch with her illegitimate son. Everybody just assumes that Tom is the boy's father, despite the fact that he and Charm have never married. Then Lily's former flame, a retired matinee idol, arrives on the scene, and since he's the one who got Lily her big break in the movies, everyone assumes that she's been sleeping with him. 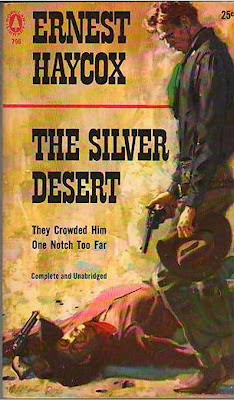 Thankfully, these soap opera elements are balanced by some well-done fistfights and shootouts. As I've noted before, Haycox skimps on the action in some of his work, postponing it and then having it occur off-screen. Not so in THE SILVER DESERT, although there are a few times when Tom Sebastian chooses to wait when he should have slapped leather. Everything builds to an excellent showdown at the end.
Haycox writes very vividly about the landscape and about human emotions, so much so that every now and then it causes the pace of the story to slow down a little too much, in my opinion. But I didn't have any trouble staying with it, and overall I really enjoyed THE SILVER DESERT. I'll always be more of a shoot-em-up fan at heart, but from time to time I like a more literary Western such as this one. It's not one of Haycox's best-known novels, but I think it's worth reading.
Posted by James Reasoner at 6:00 AM

I have a stack of Ernest Haycox westerns. Time to read one after your entertaining review!

I like Haycox, but I think he is a little wordy.

I have a new-to-me Bantam pb called THE BEST WESTERN STORIES OF ERNEST HAYCOX. I wonder if there's some crossover with the collection you read. Haven't dipped into it, but your review makes me want to.

I've always liked Ernest Haycox. He published many stories in the Doubleday pulps like SHORT STOIES and WEST. Then he hit the big time making good money with the slicks.