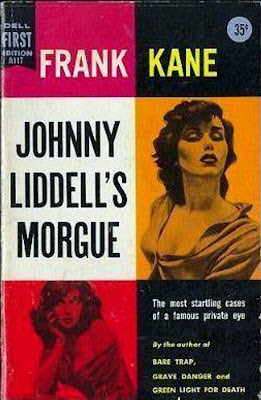 I enjoyed the stories in STACKED DECK, the Johnny Liddell collection by Frank Kane I read a while back, so I went ahead and read JOHNNY LIDDELL'S MORGUE, the other Kane collection I have. Once again the stories come from a variety of sources, several from MANHUNT, at least one from THE SAINT DETECTIVE MAGAZINE, and one, "Morgue-Star Final" from the July 1945 issue of the pulp CRACK DETECTIVE, making it the earliest Liddell story I've read and possibly the first in the series.
"Lead Ache" starts things off with a bang, as Liddell's investigation into the murder of a reporter leads him to a dime-a-dance racket with a sinister secret.
"Frame" is a pretty substantial novelette about a washed-up Broadway star and a diamond robbery allegedly committed by an operative who was working for Liddell. Naturally Johnny doesn't believe his associate was crooked and sets out to discover what really happened.
In "Return Engagement", Liddell's client claims to have murdered a man six months earlier, but according to the newspaper that supposed victim was killed in a hit-and-run accident the night before. Liddell's attempt to discover the truth leads to another murder before he sorts everything out.
"The Dead Grin" finds Liddell investigating another apparent accidental death, this time for an insurance company. The plot in this one starts out looking incredibly obvious, but then Kane springs a nice twist at the end.
"A Package for Mr. Big" is a novelette that begins with a beautiful, mysterious blonde giving Liddell a package to hold for her since she's in danger. It's not long before people are dying and Liddell is taking on the Mob and their hired killers. This story is full of action and the pace never lets up for long.
Liddell's sometimes-girlfriend, reporter Muggsy Kiely, appears briefly in "A Game of Murder". I would have liked to see her play a bigger part in the story. Back when I was reading the Liddell novels, I always liked Muggsy more than I liked the girlfriends/secretaries/sidekicks of most private eyes. She had spunk, and unlike Lou Grant, I like spunk. Anyway, blink and you'll miss her in this one, which is a pretty good story despite that as a beautiful redhead (is there any other kind in Liddell's universe?) involves Johnny in a messy divorce case that includes murder.
"Morgue-Star Final", in which Johnny investigates the murder of a newspaper gossip columnist who's been feuding with a mobster, reads like it might be the first of the series, all right. Liddell isn't quite the same character he is in the later stories. He's more unpolished, and at one point he's described by another character as "a dumpy little man", as opposed to the big, ruggedly handsome guy he is in the other stories. Kane's style is a little different in this one, too, as he always refers to the character by both names, rather than "Johnny" or "Liddell". Slightly inconsistent with the rest of the series or not, it's still a pretty good story.
The book concludes with "Gory Hallelujah!", one of the bad-pun titles Kane was fond of. In this one, Liddell travels to New Orleans, where he maintained an agency at one time, to investigate the suicide of a beautiful young woman. Kane does a fine job with the local color and throws in an action-packed plot involving voodoo and blackmail.
These stories are about as traditional (or old-fashioned, if you prefer) as they come, which makes them very satisfying literary comfort food for somebody like me who grew up reading hardboiled private eye yarns. I don't think this is quite as strong a collection as STACKED DECK, but I enjoyed it and think it's well worth reading. An e-book edition is available from Prologue Books, and if you're a private eye fan, too, you should check it out.

There was a dime-a-dance setting in an old 77 SUNSET STRIP episode that I watched a couple of years ago on a gray-market DVD. I'll have to go back and see if there's a "based on" credit citing Kane's story. At the time I thought it was an odd element in a 1959 or 1960 TV show. I'd always assumed that such places were strictly a Depression-era thing.

I bought this one in ebook format. I'll have to get to it.

LEAD ACHE was adapted for the McGavin MIKE HAMMER, which used lots of Kane scripts and/or short stories (almost always Liddell ones).

I love Frank Kane, recycled lines and all ("Johnny Liddell leaned on the bar with the ease born of long experience"). And boy, did people smoke in those books, and I do mean cigarettes.

Fred Blosser's mention of TV PI shows prompts me to note that Kane was a key writer in the original "Mickey Spillane's Mike Hammer" show (starring Darren McGavin). Kane scripted more than a dozen episodes and the best of them were straight rewrites of Liddell stories. In fact, I always think of that show as "Frank Kane's Johnny Liddell" as McGavin's tough but lighthearted interpretation of the role is a long way from Mickey's conception. In conversation I once asked Mickey about these Hammer/Liddell episodes and he promptly called Kane an unpleasant name and said he had him fired when he found out. Robert Turner in his memoirs refers to his time in Hollywood writing Hammer scripts and how he was amazed at how fast Kane could turn out a script. No wonder!

There's also a pretty good movie, based on a non-Liddel book called KEY WITNESS; the book is one of Kane's best, the film is directed by unsung noir master Phil Karlson and features a very young Dennis Hopper.

I'm another Liddell fan and noticed that hed written some of thbe McGavin Mike Hammer's--or, at least, they were based on his stories.

Kane found himself the star contributor to WEB DETECTIVE and other bottom of the market cf magazines not long after...I wonder if the books dried up at about that time, or if book sales made the extra pennies off the magazine sales just enough gravy (and obscure enough not to affect paperback audiences) to be worthwhile...