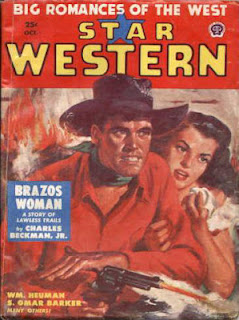 Months ago I wrote about the October 1953 issue of STAR WESTERN in the Saturday Morning Western Pulps series. Well, here's a comment that popped up recently on that post:


I ran across your comment about your unfamiliarity with my husband, who wrote as Charles Beckman, Jr., back in the vintage pulp days. He wrote for a wide variety of magazines in the mystery, detective, suspense, western genres. At 91, he has recently discovered the pulp fans around the country and is now putting together a collection of some of his stories. This is a do-it-yourself project, so the going is slow, but we'll get there. Just thought you might want to know that an old pulp author is still among the living. By the way, his real name is Charles Boeckman.


I'm always happy to hear that anyone who wrote for the pulps is still with us, and when that collection of Charles Beckman Jr. stories is published, I'll certainly pick up a copy and spread the word that it's available.
Posted by James Reasoner at 8:55 AM

This is so cool. If you are in contact with him and his wife and there is anything any of us can do to help get his collection out ...

That's fantastic news. Sign me up for a copy.

Unfortunately I don't have any contact info for them, but I'm hoping Mrs. Boeckman will see this post and get in touch again.

James, Mrs. Boeckman tried posting a message but couldn't. I am in contact with them. She asked me to post his message. It is below:


Hey, Charles Boeckman here.
I didn't know that any of my FANS were still alive! Thanks for the comments. They are much appreciated. The anthology is in progress. We plan to post in on Amazon when it is finished. The title will be SUSPENSE, SUSPICION, & SHOCKERS. It contains reprints of some of my early mystery, suspense, and surprise ending stories.

It would be great to have a central place where I could communicate with lovers of pulp fiction. But I am pretty clueless about social media sites. I do have a page on Wordpress which can be accessed through CharlesBoeckman.com. But it has only a little info about a jazz novel that I published a year or so ago.

It is great to learn that there are folks who love those old pulp stories.

Don't know how to get my email address to you without posting it for all to see and risking phishers finding it and flooding my ebox with spam.

My wife is typing this for me on her iPod, so don't know how I will be identified on the blog. Don't understand the different ID choices. Hope this gets through.

Tom, thanks for posting this.

Charles, this is the second Golden Age of Pulp Reprints, after the Sixties with Doc Savage, The Shadow, etc., but I think what's going on now is even better because of the wide variety of pulp stories being reprinted. Pulp fans may be limited in number, but we're unlimited in enthusiasm for the great stories of that era. A lot of them read this blog, so if you'll let me know when your book is ready, we'll spread the word as far and wide as possible.

We were discussing Charles Beckman on the PulpMags discussion group earlier this year. Then Steve Lewis on his MYSTERY FILE blog also had an entry. Here is the link http://mysteryfile.com/blog/?p=14315

He is still fondly remembered by pulp collectors.

I just bought Honky-Tonk girl. Thanks, James, for introducing me to yet another fine pulp writer from "the day" and costing me yet more money! Albeit money well spent.

Going to try again to post here. Love all the comments. Will have Charles read them tomorrow. He is so pumped up that folks still want to read what he wrote so long ago. Can't figure out why I have such trouble posting here. Could be that my IPod doesn't work as well as a regular computer would on this site. If this fails, I will try the trusty desk top tomorrow.

Hi Patti. I've been indexing a fair bit of your husbands work on the Fictionmags Index (http://www.philsp.com/homeville/FMI/0start.htm) which I also host. Can you confirm whether or not Charles also wrote the books HOUSE OF SECRETS and ALL OUR YESTERDAYS as by C.V. Boeckman? If so, dare I ask what the V stands for?

Hi, Charles Boeckman here. I'm writing this myself this time. I'm so delighted that there are folks on the internet who remember my stories. I wrote under several names: “Charles Boeckman” and Charles Beckman, Jr. Someone asked if “Remember Our Yesterdays,” and “House of Secrets” published by Avalon were my stories. Yes they are my stories. Avalon had an editor who wanted the author's byline to sound like a woman. Don't ask me why! Who can figure out what goes on in an editor's mind! I don't actually have a middle name. The family spelling of my name is “Charles von Boeckmann.” The “von” goes back to my great-grandfather, “Karl von Boeckmann.” “Karl” is German for “Charles” so I suppose I was named after my great grandfather. My father's name is “Charles” hence the “Jr.” after my name. My great grandfather,Karl, was a widower who had three sons to raise. Karl was an officer in the Prussian army. I think he anticipated the Prussian war with France in 1870. His sons were of military age. With the “von” in their names they would automatically be put in the army as officers. To avoid any further involvement in the military life, my great grandfather, Karl, brought his sons to the U.S where they immediately became U.S. citizens and were successful business men in Austin. At any rate, to satisfy the Avalon editor, I said my middle initial was “v” for :”von” So I told the editor my name was Charles von Boeckman or “CV Boeckman.” Actually the “von” isn't a middle name at all. It translates to mean “From the House of.” So it would be translated to: “Charles from the house of Boeckman.” In Europe it would be considered a title similar to “Sir” in Great Britain. But it doesn't have any meaning in the U.S. So I don't use it. (If I moved to Europe, I'd probably use the “von.” I think it is a title that goes back to the days of knights.)

I''ll be happy to answer any other questions you might have about the early pulp days of the 1940's and 1950's. I had a lot of good friends among the editors and writers of that era. The collection we are working on now will have a lot of that information.

(Patti adding an addendum: Charles has a video transferred to CD of him and Talmage Powell, another pulp writer and good friend, discussing the pulp days, including editors and writers. We don't know what to do with it. Should we post it somewhere on line, maybe?)

Patti,
I definitely think that video should be on-line. If you want to post it on YouTube, I'll run it here as well, and I suspect other bloggers will want to link to it, too.

Patti Boeckman here. I am reading the bio info of the posters here and am amazed at your interesting lives and the breadth and depth of your writing. I am in very heady company.

This is really great stuff. I sure hope that video makes it online.

I'm a Finnish writer and publisher and would like to ask your permission to do a small booklet with Charles's stories. Would you please contact me at juri.nummelin@pp.inet.fi?

To Phil and Juri,

I have forwarded your emails to my husband's computer. He has difficulty with these blogs posts, so I am handling the initial contact. He will be happy to hear from you. This is so exciting. People who love those old stories that we though had been long ago forgotten. WOW!! How did we miss out on this these last few decades? We had absolutely NO IDEA!! Still blows my mind.

I write a blog on pulp authors and history. Would you mind doing an interview for my blog?

You can get in touch with me at: