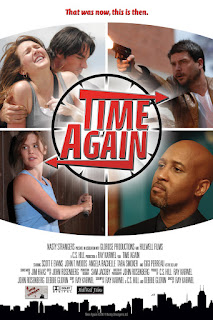 TIME AGAIN, the action movie directed by my friend Ray Karwel, will be released on DVD tomorrow by Brain Damage Films. Check it out:

Brain Damage Films is proud to announce the August 21, 2012 release of “Time Again” on DVD.  Coming off a successful festival run where it won an Award of Merit and was twice nominated for Best Action Film, “Time Again” takes the audience on a wild sci-fi adventure into the notorious criminal underworld as a young waitress must travel back in time to change the course of events that led to the death of her sister.
First time director Ray Karwel, delivers a fun, swift-moving action flick that really takes off.  “Time Again” was edited by renowned Hollywood film editor John Rosenberg and stars veteran actress Gigi Perreau (Journey to the Center of Time, The Brady Bunch).  It also features in starring roles Scott F. Evans (Big Bag of $, Alien Abduction), John T. Woods (Mega Snake, Zombie Strippers, House, NCIS, and 24), Angela Rachelle (The Kiss, Sexy Evil Genius, The Mentalist), and Tara Smoker.
People say you can’t change the past, but what would you say if you were given the chance to make things right?  That’s the question answered in “Time Again” as two sisters make their way through operatic shootouts and heroic bloodshed.
The “Time Again” DVD includes director commentary, an extended scene and audition tapes of some of the main actors.
Posted by James Reasoner at 11:39 AM