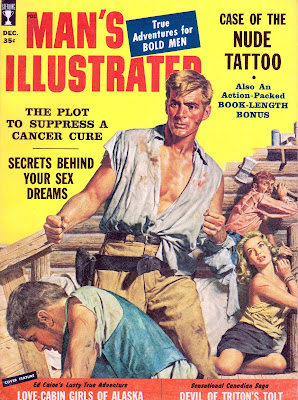 This isn't going to be a regular series like the weekend pulp features I run, but from time to time when I finish reading one of these magazines I'll have a few comments about it. This is actually the first men's adventure magazine I've read in many years, and I enjoyed it.
Start off with a pretty good cover by Stanley Borack. With that torn shirt, our two-fisted hero bears a distinct resemblance to James Bama's version of Doc Savage, doesn't he? I'm not well-versed enough to know for sure, but the model for this one could have been Steve Holland, who modeled for hundreds of paintings that wound up as covers on men's adventure magazines. And of course a few years later was the model for Bama's Doc Savage paperback covers. I also like the guy in the back clutching the ax. Old Torn Shirt better watch out.
Moving on to the inside, the Action-Packed Book-Length Bonus mentioned on the cover is "Colter's Run", a lightly fictionalized retelling of frontiersman John Colter's famous run that allowed him to escape from his Blackfoot captors. It's well-written and pretty entertaining. The author is listed as Gene Caesar, but nearly all the bylines in these magazines were pseudonyms.
Speaking of which, the World War II story "That's No Fence – That's Germans!" is credited to George Bush. The story itself is again a lightly fictionalized version of a historical incident, in this case one of the side battles that went to make up the Battle of the Bulge, in which a group of support troops – clerks, cooks, mechanics, even some entertainers from Special Services – have to fight off a German flank attack behind the front lines and hold a town for several days against superior forces for several days until reinforcements arrive. It's a good yarn and pretty accurate historically.
"Case of the Nude Tattoo" by Henry Durling is a true-crime yarn set in in the 1890s. It's written well enough, but there's not much to it. The same is true of "Go-Devil and the Butcher of Triton's Tolt" by Colin Thompson, a purely fictional story about an American flyer who crash-lands in Labrador during World War II, falls in love with the girl who nurses him back to health, and returns after the war to marry her, only to run afoul of some local bullies. This one could have been pretty good, but the plot runs out of steam and the story suffers from an odd structure as well.
"Dead Man's Ride" by Stan Smith is considerably better. It's a runaway train story, set in in 1875, and concerns a young man's gallant attempt to stop an out-of-control elevated train after the engineer suffers a heart attack and dies with his hand on the throttle. I don't know if there's any history to it or if it's all fiction, but it's fairly suspenseful. This one could have easily appeared in the pulp RAILROAD STORIES.
This brings us to the cover story, "Ed Caine and the Love-Cabin Girls of Alaska" by none other than Edwin Caine his own self. I don't have any idea who wrote this, but his tongue had to be firmly in his cheek as the over-the-top action never stops. You've got a tough, hardboiled pilot who flies prostitutes into the wilds of northern ("a brushhopping pimp", he calls himself), fistfights, shootouts, beautiful girls strung up and whipped by a crazed sex maniac/geologist (you know how those guys are), a plane crash, and an avalanche. Man, if the author had worked in some quicksand and a gator, this story would have had everything. It's great fun, marred only by a slight letdown of an ending after all the wild stuff that's come before.
All the other articles, like "The Plot to Suppress a Cancer Cure" and "Secrets Behind Your Sex Dreams", I found pretty much unreadable. But with two pretty good stories and several more that were entertaining, I enjoyed the issue quite a bit overall.
Posted by James Reasoner at 6:00 AM

They should reprint some of this stuff (lol).

There's a collection of some of the best stories coming out later this summer, edited by my friend Bob Deis. I'm sure I'll post about it as soon as it's available.

James this has to be the best review I've ever read about a mens adventure magazine. I'll have to see if I have this issue. I'm really looking forward to the collection of stories that you mention above and I hope it is in a print edition and not just e-book.

The cover is nice but sort of sedate for a mens adventure magazine. I've seen some really bizarre covers that just about make you gasp with disbelief.

I've been looking for a reprint collection of stories from the Men's Magazines but pickin's in SC are less than slim. I'm looking forward to your post on the collection later this summer. Thanks.