For a while now, Livia's been working on a new website for me, and she has it ready to people to take a look at, if you're so inclined. You can find it here. One of its features is the most complete list of my books that you'll find on the Internet. Note that I say "most complete" not "complete", because there are thirty or forty books that I'm contractually obligated not to claim to have written. But you can find enough Reasoner books there to last anybody a long, long time . . . And of course, many thanks to Livia for all her hard work on this and everything else. I couldn't do any of it without her.
Posted by James Reasoner at 2:38 PM 4 comments: 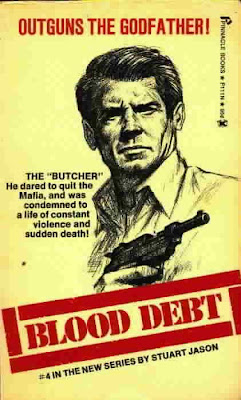 I hadn't read one of these books in a while, so when a couple of comments about the series cropped up on Rara-Avis recently, I was prompted to dig out the next one in the stack. I don't own a copy of #3, so I'm skipping to #4 -- not that it really matters.
The Butcher, as I'm sure you'll remember, is a former crime boss named Bucher -- "the only man to quit the Syndicate and live!" (Well, with the exceptions of Ennis Willie's Sand and Peter Rabe's Daniel Port, of course.) After leaving the Mafia he becomes a secret agent working for a mysterious government organization called White Hat. His assignment this time around is to find out who's using guided missiles in a gigantic extortion scheme. All he knows is that the sinister mastermind behind the plot calls himself the King of Spades. Bucher's assignment takes him from Miami to Paris to Morocco and finally back to New York, where he has his final showdown with the King of Spades. Along the way he has to deal with the usual bewildering array of plot elements that finally come together to make sense, sort of.
Like the other early books in the series, this one was written by James Dockery. His bizarre, melodramatic style is unmistakable. But to be honest, the charm of his over-the-top prose is starting to wear a little thin for me, or maybe this just isn't one of the better entries in the series. It isn't helped by the fact that for long sections of the book, not much happens, especially in Bucher's Moroccan trip which seems endless. Despite that, I enjoyed the book because, just like the others I've read by Dockery, it's like nothing else you'll ever encounter in fiction. I'll definitely read more of them . . . but if you give the series a try, it's a good idea to space them out.
Posted by James Reasoner at 1:03 PM 4 comments:

The Case of the Daring Decoy -- Erle Stanley Gardner 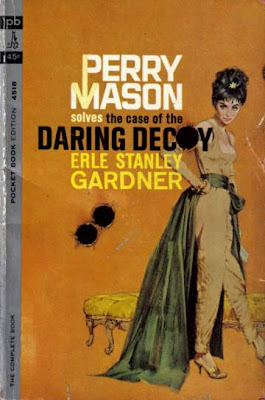 THE CASE OF THE DARING DECOY is from 1957, still a good period in the Perry Mason series, if not as consistently excellent as the more hardboiled Thirties and Forties. By this time many of the books opened not with Mason, as the earlier ones do, but with the person who will turn out to be the client later on. That’s the case here, as the first chapter of the book features Jerry Conway, the young, dynamic president of an oil exploration company who’s facing the fight of his life as a former associate wages a proxy battle to take over the company. Conway is contacted by a mysterious woman who claims to have information that will be valuable to him in his struggle, but she says she’ll turn it over to him only after he jumps through some hoops to make sure neither of them is being followed. Their rendezvous is supposed to take place in a hotel room, but when Conway gets there he finds a different woman, wearing only her underwear and brandishing a revolver. Conway winds up with the revolver (you knew that was going to happen) and a murder charge hanging over his head (equally inevitable). When you’re in a situation like that, who you gonna call? Perry Mason, of course.

From there it’s the usual dizzying mix of interrogations, banter, genuine clues, and red herrings. Is there only one gun involved in the case, or two? What about the peas in the room service meal? Why did the half-naked, gun-toting babe have a mud pack on her face? There’s a little more comedy than usual in this one, with some snappy, funny lines from various characters, even the usually dour Mason, and there’s even a touch of romance. The plot makes sense (I think), and for once I even spotted some of the clues and figured out ahead of time who the real killer was, something that hardly ever happens when I read a book by Erle Stanley Gardner. I didn’t have all the details worked out, but I had the right suspect pegged.

I thought this book was great fun, and my only real complaint about it is the rather sedate cover of the paperback edition. I mean, really, a beautiful woman in her underwear waving a gun around is the perfect image for a book like this, isn’t it? Even with a mud pack? (Okay, you could lose the mud pack on the cover and call it dramatic license . . . )
Posted by James Reasoner at 8:13 AM 1 comment: 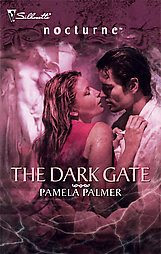 Recently I’ve read several more novels in the Silhouette Nocturne line, since Livia’s doing a book for them, and Pamela Palmer’s THE DARK GATE is the best one I’ve come across so far.

Washington D.C. homicide detective Jack Hallihan is on the trail of a serial rapist who has started murdering his victims. He has another problem to deal with, too – ever since he was a child he’s heard voices babbling inside his head, the same bizarre malady that drove his father to alcoholism and then suicide. Beautiful defense attorney Larsen Vale gets mixed up in Jack’s investigation, and she has a secret, too. She has psychic visions of other people’s deaths, and a sinister, other-worldly albino has started cropping up in those visions. It soon becomes apparent that the albino is responsible for the rapes and murders Jack is investigating. Then there are the two weird little characters running around Washington shooting people with arrows, and the audience at the Kennedy Center that’s turned into a rampaging horde by mass hypnosis, and the entire Washington police force falling under the sorcerous thrall of a villain from an alternate universe . . .

This is an enthusiastic blending of a “cops vs. serial killer” suspense novel with urban fantasy, and as a result it reads sort of like the bastard child of James Patterson and Mercedes Lackey, with a little Norvell Page thrown in for good measure. There are gunfights galore and several hot sex scenes, and even though this is Palmer’s first novel, it’s written in smooth, fast-paced prose that really gallops along. I had a few minor issues with it, such as the fact that the stubborn reluctance by the hero and heroine to open up to each other about their psychic manifestations seems more like a plot convenience than a realistic development, but overall THE DARK GATE is one of the more entertaining novels I’ve read in any genre lately, and I’m glad it’s set up for a sequel. Good stuff, and well worth reading.
Posted by James Reasoner at 1:28 PM 1 comment:

The Fast and the Furious: Tokyo Drift 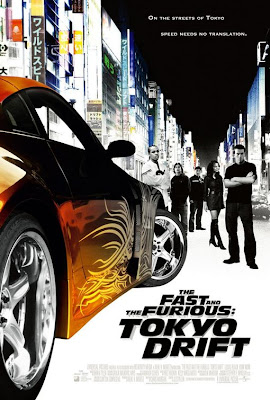 There’s not a lot of plot to this one. Lucas Black and Bow Wow play American teenagers in Japan who get involved in the high-speed street racing scene in Tokyo, where the drivers’ favorite maneuver is to turn their wheels so that their cars slide sideways, the Tokyo Drift of the title. That’s pretty much it as far as the story goes. Most of the movie consists of racing scenes and hot Japanese girls in skimpy outfits. If that’s enough to satisfy you, I can recommend TOKYO DRIFT. I don’t mind admitting, though, that I dozed off a couple of times during this one.

By the way, for the most part this movie seems to be totally unrelated to the first two in the series except for the street racing subject matter, but it actually does connect up with the others very late in the film, although in a pretty arbitrary manner.
Posted by James Reasoner at 12:01 PM 2 comments: 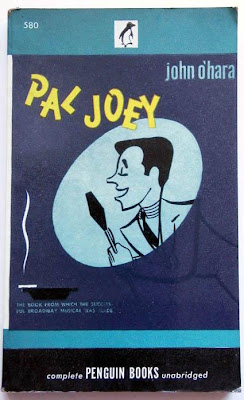 My interest in John O’Hara’s work continues. PAL JOEY is an early novel of his from 1940 that’s told in the form of letters from Joey, a struggling nightclub singer in the Midwest, to his friend Ted, a much more successful singer and bandleader. I was aware of PAL JOEY only as a movie musical I’ve never seen starring Frank Sinatra and didn’t know the film was based on an O’Hara novel until recently. It must have been quite a chore for the screenwriter to turn this book into a coherent screenplay, since there’s not much actual story to work with. Joey sings in various second-rate nightclubs, romances an assortment of beautiful young women (or “mice”, as he calls them), and is jealous of his friend Ted’s success. That’s about it for the plot.

But O’Hara’s work isn’t really strong on plot to start with. He concentrates on characterization and dialogue instead. PAL JOEY manages to be both funny and very dark at the same time. Joey is uneducated, as is evident from the misspellings, grammatical errors, and tortured sentence structures in the letters he writes, but he has more than enough lust, greed, and ambition to make up for it. His jealousy of his friend’s success comes through plainly, as does his unwillingness to take any of the blame for his failures, even though most of them result from losing his temper or trying to take advantage of someone. He’s about the most venal character you’re ever going to come across, which is probably just what O’Hara intended.

PAL JOEY is also short and moves right along, always a plus in my book. I enjoyed it, and it’s got me really curious about the film version. I’m going to have to hunt up a copy of the DVD and give it a try.
Posted by James Reasoner at 6:29 PM 6 comments:

I just noticed on the Amazon page for DUST DEVILS that a starred review from BOOKLIST has been posted. I don't know if the review is available on-line, but you can read it on the Amazon page if you're interested. One big word of warning, however: the review gives away pretty much EVERY plot twist in the book . . . and DUST DEVILS is a book that has a lot of plot twists. So please, don't read the review if you haven't read the book yet. Still, I'm very pleased that the folks there think it's a good book.

My Internet service is still intermittent, but it's supposed to improve any day now . . .
Posted by James Reasoner at 8:06 AM 2 comments:

The good folks at Bookgasm have posted a new review of DEATH HEAD CROSSING, and as always, I appreciate the kind words. (Thanks to Scott Cupp for the heads-up.)

I have only limited Internet access at the moment, but the situation is scheduled to improve sometime next week. In the meantime, keep watching the skies.
Posted by James Reasoner at 2:22 PM 4 comments: