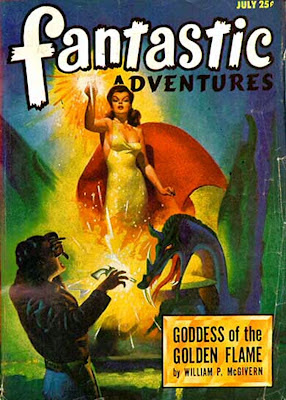 This is an issue I read several years ago. The William P. McGivern novel is a pretty good one, starting out as a hardboiled espionage yarn before turning into a lost race story. When I was younger I knew McGivern only as a mystery writer (the local library had a number of his books) and was surprised when I found out how much science fiction and fantasy he had written. Also in this issue is a Toffee story by Charles F. Myers, and those are always entertaining. Plus stories by Theodore Sturgeon and several other writers I'm not familiar with, who may or may not have been house-names. I'm not a huge fan of FANTASTIC ADVENTURES, but there are some good stories to be found in it.
Posted by James Reasoner at 7:00 AM

Don't know if you're familiar with Comic Book Plus, a site for free public domain comic book scans, but I noticed today they were putting up Scans of some Western pulps like Two-Gun Western novels and Mammoth Western.

Thanks for the tip, Charles! That's a site that might take forever to go through. Tons of good reading, though.

It's surprising that those Victorian era style Lost Race stories were still being written as late as the Forties. They really milked those pulp tropes for all they were worth.

I've also had problems with FANTASTIC ADVENTURES but I keep looking at my set hoping to find good stories. I'll have to pull this issue out and read it.