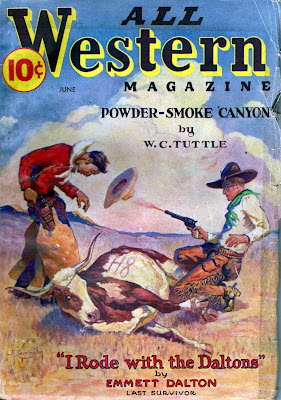 This is an issue I own and read recently, and the cover scan is from that copy. The cover painting by R. Farrington Elwell, an artist I'm not really familiar with, is called "Disputed Brands", and it's exactly what it sounds like.
The issue leads off with a novelette from one of my favorite authors, W.C. Tuttle. This is a stand-alone story, rather than being from one of Tuttle's many different series, and it's a pretty good one. His hero this time is a young cowboy named Rusty Steele who has to sort out the mystery of a long-standing feud between two ranches. There are stagecoach wrecks, disappearances, and shootouts, and while the big twist in the plot is pretty predictable, Tuttle's fast-moving, humor-laced style is so enjoyable that it doesn't really matter.
Next up is the second part of a three-part series of articles called "I Rode With the Daltons!" Supposedly written by Emmett Dalton, the lone survivor of the famous outlaw gang, "as told to" Charles M. Martin, it's a fictionalization of several historical incidents. I suspect that former cowboy and prolific pulpster Martin, who sometimes wrote as Chuck Martin, wrote the whole thing with little if any input from Emmett Dalton. Either way, it's an entertaining piece that stops just short of the gang's raid on Coffeyville, Kansas, which turned out to be their Waterloo.
The short story "Coffin Talk" is by-lined Walt Remington, which sounds like a pseudonym to me. I don't know who wrote it, but this yarn about a sinister undertaker and a couple of vengeance-seeking cowboys is enjoyable.
Eugene Cunningham had an odd, distinctive style that takes some getting used to, but once you do, it's very effective. His novelette in this issue, "Concho Guns", finds a young cowboy on the run from the law for a shooting that wasn't his fault, and naturally he finds himself in even more trouble when he winds up in the middle of a war between two rival store owners, one of whom is also the local sheriff. Cunningham's work has the reputation of being some of the most violent in the Western pulps. That's true here as there are shootouts and corpses galore, and it's hard to guess who will survive and who won't.
E.W. Thistlethwaite (there's a rugged Western name for you) evidently wrote a series of articles for ALL WESTERN about various professions. "Ranger!" isn't about the Texas Rangers, as you might suppose. It's an examination of a Forest Ranger's work and daily life. Pretty interesting stuff.
James P. Olsen was a prolific pulp writer who also used the pseudonym James A. Lawson. Under that name he wrote a fine series of slightly wacky hardboiled crime yarns about oilfield troubleshooter Dallas Duane. Olsen could write straight action yarns as well as Bellemesque goofiness. His short story "Matagorda Man" is the more straightforward type and concerns a mysterious manhunter tracking down a notorious outlaw. This one also has a "twist" ending that's anything but. I enjoyed it anyway because of Olsen's terse, fast-moving style.
"Johnny Colt Rides" is by Hapsburg Liebe (really Charles Haven Liebe), another author who shows up all the time in the Western pulps. He wrote for just about every publisher in the business and turned out competent stories like the one here, which finds the young gunslinger of the title venturing below the border to trap an outlaw gang.
Clay Starr is a house-name, so there's no telling who wrote "Too Many Cattle". It's about a rancher trying to prevent a tick-infested herd from contaminating his range. A decent story, but like the one by Liebe, nothing special.
This issue is rounded out by "Burnin' Powder", a column on guns and ammo by Philip B. Sharpe, a name that's familiar to me. I think he wrote about similar subjects for other pulps.
I came across a stack of ALL WESTERN issues the other day while I was looking for a particular one (I didn't have it), and it appears to have been a pretty good Western pulp. June 1935 is certainly a fine issue, with three excellent stories (by Tuttle, Cunningham, and Olsen), and readable ones by the other authors. I'm not sure I'd ever read a pulp published by Dell before. I'll definitely read more of ALL WESTERN.
Posted by James Reasoner at 7:00 AM

You are right about ALL WESTERN being one of the better western pulps. It lasted for 89 issues from 1931 to 1943.

David Saunders came across an issue of (I think it was) ALL WESTERN at PulpFest. First one I'd seen. It included a nice line up of writers. David was intrigued because all the interior illos were by Frederick Blakesley, far better known as an illustrator for the air war pulps. The western illustrations were very nice, though.