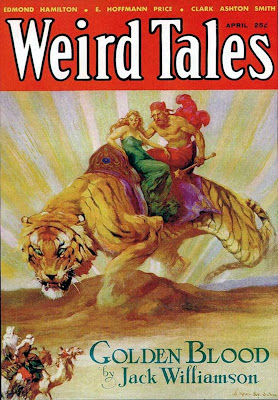 This is one of my favorite covers. It's by J. Allen St. John and illustrates Part I of the serial "Golden Blood" by Jack Williamson. I read the Lancer paperback of GOLDEN BLOOD many, many years ago, and it's one of the books I definitely want to read again one of these days. As for the rest of that particular issue of WEIRD TALES . . . how about stories by E. Hoffmann Price, Edmond Hamilton, Clark Ashton Smith, Carl Jacobi, Otis Adelbert Kline (a serial installment from one of his Venus novels), August Derleth, and Mary Elizabeth Counselman. That's all. I'd pay a quarter for that, wouldn't you?
Posted by James Reasoner at 7:00 AM

This is a great magazine. When I was discharged from the army in 1968 I celebrated by deciding my main goal in life would be to collect a complete set of WEIRD TALES and BLACK MASK.

Not start a career, raise a family, buy a house, etc. Crazy right? Well I'd do it all over again if I had the chance!

Yeah, that is one gorgeous, archetypical cover right there.

Some time ago someone on one of my Yahoo groups asked if Weird Tales published much good stuff aside from Robert E. Howard.
It was actually kind of challenging to convey to them just how spectacular a Weird Tales table of contents could be.

I finally just pulled one of my issues off the shelf at random. It was November, 1930... and it has H.Warner Munn, Clark Ashton Smith, REH, Edmond Hamilton, Seabury Quinn, Frank Belknap Long, Greye La Spina, Donald Wandrei and HP Lovecraft.
And as stunning as that line-up is, for that era it isn't really all that uncommon in terms of quality.

There's a couple of other pulps that vie for the title, but for me, Weird Tales is the greatest genre magazine of all time.

Walker,
I can think of much worse goals to have.

John,
Yeah, WT was spectacular, even in the less-well-regarded Forties. Hard to understand, looking back on it, how it struggled to survive all those years instead of thriving as it should have. If ever a magazine could be considered ahead of its time . . .