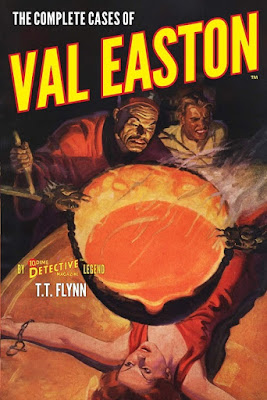 T.T. Flynn is one of my favorite Western authors. I’ve read most of his novels and many of his Western pulp stories. But he also wrote quite a bit for the detective pulps, and I’ve never read any of those yarns until now. THE COMPLETE CASES OF VAL EASTON is a new collection from Steeger Books of five novellas originally published in DIME DETECTIVE, featuring American intelligence operative Valentine Easton. I figured this would be a good way for me to sample some of Flynn’s non-Western work.
The first story in the series, “The Black Doctor”, was published in the December 1932 issue of DIME DETECTIVE. As it opens, we find Val Easton on an ocean liner bound from England to America. A coded message puts him in contact with a couple of female secret agents on board the same ship, and when a couple of murders take place, he finds himself helping with their investigation. By the time the ship reaches New York, they haven’t solved the case, but there are more murders, our heroes get captured by the bad guys, and eventually they discover that their adversary is none other than the notorious Black Doctor, a freelance spy who’s vaguely eastern European, not the sinister Oriental who’s on the cover of this book. (I suspect he’ll be along later, though.) Flynn writes really well and keeps the action moving along nicely in this story, but it’s hurt by the fact that Val Easton himself is a really flat, bland character, almost a cipher. I almost found myself wishing he’d stop during the action to perform a magic trick and then explain how it’s done. (Bonus points to those of you who get that reference, which I suspect will be many of you.)


I have a hunch that when Flynn wrote “The Black Doctor”, he didn’t intend for it to be the first story in a series. The second story, “Torture Tavern”, doesn’t show up until nearly a year later, in the September 15, 1933 issue of DIME DETECTIVE. It’s a direct sequel, too, starting only a few days after the previous story ended. At the conclusion of that one, Carl Zaken, the Black Doctor, appears to be dead and everything wrapped up, but when “Torture Tavern” begins, Zaken is recuperating in a Washington D.C. hospital and Val Easton is drawn into a nefarious plot hatched by Zaken’s partner, Chang Ch’ien. (Ah, there’s the sinister Oriental!) Clichés aside, though, Chang Ch’ien is a great character, more like a Chinese Doc Savage, albeit an evil one, rather than a Fu Manchu clone. His beautiful sister, Tai Shan, is a Dragon Lady sort who may be trustworthy but probably isn’t. Val himself is a little more likable and fleshed-out in this one, and the struggle over a deadly chemical formula is full of action that seldom lets up. This story is a nice step up from the first one.


“The Jade Joss”, from the November 15, 1933 issue of DIME DETECTIVE, finds Val, along with his beautiful blond fellow agent Nancy Fraser, once again battling Carl Zaken and Chang Ch’ien, this time over possession of the jade death mask of an ancient Chinese emperor, because as legend has it, whoever wears the mask is destined to take over China and lead it to world domination. Chang Ch’ien figures he’s just the guy to do that, of course. His beautiful sister Tai Shan is mixed up in the dangerous affair, too, of course. This is a really fast-paced tale, with most of the action taking place in a short period of time during one evening, and I enjoyed it. There’s a Chinese American intelligence agent introduced who’s an excellent supporting character.


Exactly a year passes (in our world, anyway) before Val Easton reappears in the November 15, 1934 issue of DIME DETECTIVE to once again battle the same diabolical duo in “The Evil Brand”. This time Val discovers that Carl Zaken and Chang Ch’ien have some sinister interest in a Chinese emissary on his way to the U.S. to visit the State Department, and that leads to a fast-moving fracas in San Francisco, including a brush with death when Val and a fellow agent are captured and taken for a boat ride by killers who intend to dump them in the bay. This one’s pretty melodramatic (you can tell that by looking at the cover), but it works well and is a lot of fun.


The series comes to an end with “The Dragons of Chang Ch’ien”, from the April 15, 1935 issue of DIME DETECTIVE. It’s a direct sequel to the previous yarn, as Easton and Nancy Fraser uncover a connection between that mysterious Chinese diplomat and a wealthy American munitions manufacturer who’s engaged to marry an equally mysterious European countess. Most of the action takes place at the magnate’s palatial New Jersey estate before shifting to a dingy factory with a dangerous secret. This is a very fast-moving story with plenty of action. It doesn’t read as if it’s designed to be the series’ concluding installment, but that’s the way it worked out. I suppose Flynn was just too busy writing Westerns to continue with it. Every story was featured on the cover of the issue in which it appeared, though, so Val Easton must have been popular with DIME DETECTIVE’s readers.

I certainly enjoyed this collection. I think Flynn probably was better at Westerns than at mysteries and thrillers, but he was a fine writer no matter what the genre, and I look forward to reading much more by him. In the meantime, I give THE COMPLETE CASES OF VAL EASTON a high recommendation.
Posted by James Reasoner at 5:30 AM

I like Flynn's stories about roving horse race bookie, Mr. Maddox. Maddox is tough inside, but he's not a hardboiled character. And there's some humor, but not like there is in the Rex Sackler, or Bail Bond Dodd stories. Steeger (Altus) put out all the Dodd tales in a two-book collection. Worth reading.

Just read the first of his two "Rawhide Kid" novellas and it was outstanding.

I’ll second Bob’s recommendation of the author’s Mr. Maddox stories. I picked them up because I was curious about such a long running series in Dime Detective but had little to no interest in the horse racing milieu that the stories take place in.
But they captured my interest as Flynn’s fascination with and appreciation of that world just spill off the page.

Plus, Mr. Maddox is a great character- a bluff, hearty, pleasant fellow with a sharp mind, a generous soul and a steely core when pushed too far. There’s been two collections released thus far by Steeger and you can count on me to pick up every volume they produce.

I have the two Steeger collections of Mr. Maddox stories and will have to get to them soon.