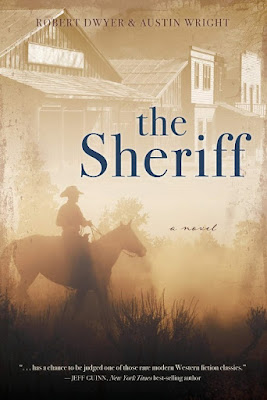 An aging Sheriff Donovan is coming to terms with his recent diagnosis of terminal cancer and desperate to maintain his tenuous grasp on Three Chop—the town he willed into existence. When Donovan enters into a bargain with a faction of rural Christian Prohibitionists, agreeing to shutter the local saloon and brothel, his plan to cement his legacy in the eyes of God meets resistance from the town’s business elite, whose livelihoods depend on liquor sales. With a band of notorious outlaws descending on Three Chop, the dispute ignites into a furious battle that forces residents to take sides, to choose between the town’s past and future.

THE SHERIFF is the debut novel from authors Robert Dwyer and Austin Wright, and a strong debut it is. Set in the last decade of the Nineteenth Century, in and around the Texas Panhandle town of Three Chop, it brings together a variety of characters—assorted dangerous outlaws, a fanatical evangelist, a dying sheriff determined to maintain law and order no matter what the cost—and orchestrates some epic showdowns between the various factions. There are definite echoes of the traditional Western here but a more literary sensibility to the writing and plotting. It’s a bleak but impressive yarn and well worth reading if you’re looking for a Western that’s a bit offbeat while retaining a fondness for what’s gone before.