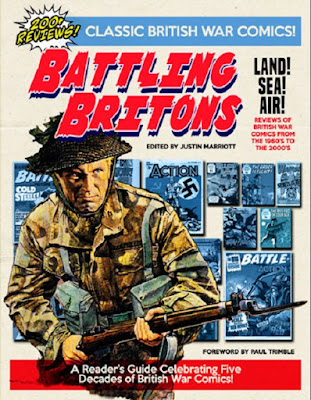 Brits at War! War at sea, in the air and on land, as seen through the pages of classic British comics. The war comic has been an enduring part of British pop culture, from the invasion of the pocket books in the 1960s, through to the explosion of weekly strips in the 1970s. Often dismissed and derided, the time has come to reassess their importance as entertainment and education. In these pages are 215 capsule reviews of war comics from the 1960s through to the 2000s, with insights to the creators, themes and sheer readability. Strips from well-loved comics such as Action, Air Ace Picture Library, Battle Picture Library, Battle Picture Weekly, Commando, Valiant, Victor, War Picture Library and Warlord. Fully illustrated with covers and panels from the stories reviewed, many of them by top European creators. Edited and co-written by Justin Marriott, with contributions from Jim O’Brien, Steve Myall and James Reasoner. Foreword from award-winning journalist and war comics expert Paul Trimble. Afterword from Commando scripter Gary Martin Dobbs.

(I wrote some of the reviews in this excellent volume, and in reading through it, I've found a number of other stories I want to look for. If you're a fan of war comics, war fiction, or comics in general, I think you're going to want BATTLING BRITONS. Highly recommended.)

Posted by James Reasoner at 8:32 AM

Thanks for letting us know about this book. I just ordered a copy from amazon.