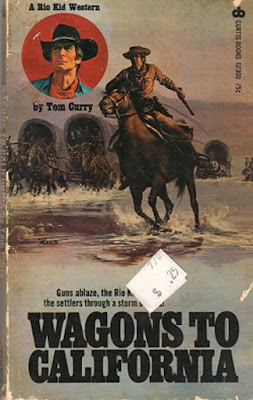 Today is the 22nd anniversary of the founding of the WesternPulps email group (more about that later), so I wanted to feature a novel published originally in a Western pulp. I turned to one of my favorite series, the Rio Kid. WAGONS TO CALIFORNIA was published in the Winter 1944/45 issue of THE RIO KID WESTERN, which ran from December 1939 to May 1953. I’ve read probably three-fourths of all the Rio Kid novels, but WAGONS TO CALIFORNIA is one I hadn’t gotten around to yet. It was reprinted in paperback by Curtis Books in 1972, an edition that seems to be pretty rare these days. That’s my copy in the scan, complete with cheap price sticker. (I didn’t pay 25 cents for it, but it was only two bucks in Half Price Books’ nostalgia section when I bought it several years ago, which, it turns out, is not a bad deal.)

At any rate, for those of you unfamiliar with the Rio Kid series, it had a gimmick: its protagonists, former army scout and cavalry officer Captain Bob Pryor and his sidekick Celestino Mireles, always interact with historical characters and sometimes take part in actual historical incidents. In this novel, Pryor and Celestino, along with legendary frontiersman Jim Bridger, are working for General Grenville Dodge and scouting possible routes for the transcontinental railroad along the Humboldt River in Nevada. That’s pretty much it for the historical connections in this one. Our intrepid trio encounter a wagon train that’s in trouble, having been attacked by Indians and now the immigrants are in danger of dying from thirst and starvation. The Rio Kid and his companions help them out, and the pilgrims wind up having to winter in an isolated valley where, wouldn’t you know it, they find gold. There’s also a group of Mormon Avenging Angels on the hunt for the murderer of an LDS bishop, and a Mormon rancher and his sons who may or may not be trustworthy.

Tom Curry, who created the Rio Kid series and wrote more of the novels than anyone else, started his career writing hardboiled yarns for BLACK MASK and other detective pulps, but he became one of the leading Western pulpsters, turning out not only Rio Kid novels like this one under his own name but also dozens of the Jim Hatfield novels in TEXAS RANGERS under the Jackson Cole house-name. His stories are solidly constructed, fast-moving, and always have plenty of action. WAGONS TO CALIFORNIA is no exception. Curry also does a great job with the wasteland setting in this one. I wouldn’t put it in the very top rank of Rio Kid novels, but I enjoyed it a great deal and am glad I got around to reading it. I need to read more of the Rio Kids.

Now, as for the WesternPulps group, when I founded it in 1999, I had no idea it would still be around 22 years later. It began on a platform called OneList, which became E-groups (or was it the other way around, I never can remember), which was swallowed up by Yahoo Groups, and is now on groups.io, where I moved it a few years ago when I saw the writing on the wall and realized Yahoo Groups would be going away. It was either my first or second foray into social media. I may have subscribed to the original Rara-Avis list before that, or I may not have. (Rara-Avis, which Bill Crider told me about, lo, those many years ago, is still around and still active, as well.) Email groups have gone the way of the dinosaurs, for the most part, but as I’ve said before, WesternPulps will be around as long as there’s a platform to host it and I have the mental ability to keep up with it. (No wagering on which of those will go away first!) It’s a low-traffic list, although spirited discussions break out from time to time and it’s the best place to ask any questions someone might have about the Western pulps. There’s also a wealth of bibliographic information and cover scans in the files section, much of it added in the early days when the list was more active and salvaged when I moved things over to groups.io. If any of you would care to join, if only to rummage through the archives, you’re more than welcome and can do so here.

I have really enjoyed the dozen or so Rio Kids I have read. Did not realize (or, at my age, forgot that I knew) that Curry wrote some of Jim Hatfields, another series I like and have read quite a few more.

By the way and off topic, stumbled on a Twitter account “pulp librarian”. Not much pulp but some interesting stuff. A series of Wil Halsey Mans Life covers are a blast. Also introduced me to the Spectros western series, I got one of the ebooks, a magician and a gunslinger teaming up in the old west for some occult adventures. Haven’t read it yet but seems weird for Piccadilly Press.

If I recall correctly, Tom Curry and Leslie Scott each wrote 55 Jim Hatfield novels, meaning that between them they accounted for just over half the series, which totaled 208 novels. Walker A. Tompkins was next, followed by Peter Germano and Roe Richmond, plus quite a few other authors who wrote 1-3 novels apiece. Curry and Scott dominated the Thirties and Forties, Tompkins' novels began to appear in the second half of the Forties, and then he and Germano dominated the rest of the run through the Fifties. It's a great series, consistently well written with only a few clunkers that I've run across.

I read the first Spectros book many years ago and liked it, don't know why I never continued with it. The real author was Paul Lederer, who wrote a lot of house-name books (he did all but the last few Shelter books as Paul Ledd and all the Ruff Justice series as Warren T. Longtree, plus assorted Lone Stars), and wrote mostly under his own name and the pseudonym Owen G. Irons. Good solid writer.

Thanks for the info, as always.