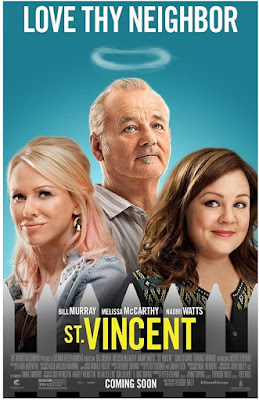 This comedy/drama from 2014 lands solidly in the "grumpy old man and kid are thrown together and learn life lessons from each other" school of filmmaking. While the plot is pretty predictable, Bill Murray is very good as the title character and the rest of the cast is solid, including Naomi Watts as a Russian hooker with a heart of gold and Melissa McCarthy as the kid's mom. The script has some funny lines and is heart-warming without being mawkish. And the soundtrack is excellent, including a great closing credits sequence featuring my favorite Bob Dylan song, "Shelter From the Storm". This movie won't change your life, but it's a pleasant enough way to spend a couple of hours.
Posted by James Reasoner at 6:20 AM

I liked it partly because I know several of the areas it was filmed in. The main setting, Sheepshead Bay, is the part of Brooklyn where my wife grew up. One part you wouldn't get unless you lived here: the kid takes the bus to a school that is actually St. Patrick's in Bay Ridge, where we live now, and many miles away from where they live in the movie. Anyway, Bill Murray is almost always worth watching.

The same sort of thing happened here when the original WALKER, TEXAS RANGER was being filmed in the Dallas/Fort Worth area. They would mention they were in Dallas when they were clearly in Fort Worth, or Walker would drive (apparently) clear across the Metroplex only to wind up across the street from where he started out.

On Chicago cop shows, all foot chases occur on the exact same street, there is only one el train stop, and parking is always curiously easy to find.