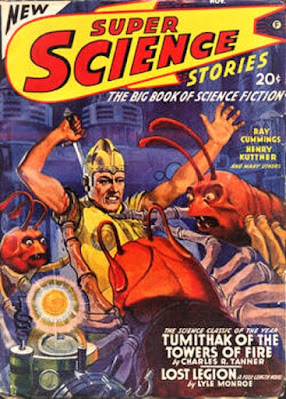 You know, sometimes it seems like the bugs around here are that big, too. This looks like a great issue of SUPER SCIENCE STORIES, with stories by Robert A. Heinlein (writing as Lyle Monroe), Alfred Bester, Henry Kuttner, a collaboration between Ray Bradbury and Henry Hasse, a yarn by pioneer pulpster Ray Cummings, and a reprint of a Tumithak of the Corridors story by Charles R. Tanner. I've been aware of those Tumithak stories for many years now, but I'm pretty sure I've never read one. Are they worth seeking out?
Posted by James Reasoner at 6:00 AM

As I recall reading the one Asimov anthologized in BEFORE THE GOLDEN AGE (that arguable title), fewer years after its first publication than have transpired since, yes.

How's that for noncommittal endorsement!

Frederik Pohl noted in his memoirs that the stories Cummings sold him, with Cummings a Grand Old Man of the field and Pohl one of the youngest pro editors, were uniformly disappointing...but Pohl felt obligated to take them.

Pohl also noted some mild sexual chatter in the Heinleins RAH offered Pohl ere hy John Campbell didn't want them for ASF...part of why Heinlein wouldn't drop back into ASTOUNDING too often in his later years.

Todd,
I read a few of the stories in BEFORE THE GOLDEN AGE many years ago, but not the Tanner. That copy was lost in the fire of '08. I've since replaced it, however, that copy is still sitting untouched on my shelves. It may be time to pull it down, if I can clear the decks on some of the other stuff I need to read. Your comment about fewer years elapsing between original appearance and reprint than between reprint and now is something I think about often. The year I was born is considerably closer to the Spanish-American War than it is to today.

This is a favorite pulp of mine and I have all the issues.

Lesser time-span between my reading it in 1978 and when it was published initially, than between 1978 and now! At some level this realization/reframing of time as we age shakes up a lot of us, however little it probably should...

Pohl and his boss did a better job with SSS and ASTONISHING than he gave them/himself credit for.

I have this issue (somewhere). Bought it about 20 years ago —I’d gotten it into my head that I needed to read as many “uncollected” Kuttner stories as I could find. I know I read “Red Gem of Mercury” at the time but remember almost nothing about it now. Also of note, “Pendulum” was Bradbury’s first professional sale. Pretty sure I first read it in one of those Moskowitz / Norton horror paperbacks.

Apparently, there is a FOURTH Tumithak story, first published in the early ‘Aughts’ by a small-press publisher. Alas, I haven’t read a single one. Maybe I’ll dig up my copy of BEFORE THE GOLDEN AGE, put it on the tower of books next to my bed....

Ah, the old “More Time Has Passed Since Then” game! I had a whopper just a few weeks ago, triggered by an online article about Aurora’s notorious “Monster Scenes” model kits that came out in ‘71. That was right around the time I first saw the Universal Classics on tv (and became obsessed with ‘em). The ‘31 FRANKENSTEIN especially seemed ancient to my ten-year-old eyes. I didn’t consciously realize it at the time, but that faraway “Old Timey” feel was an integral part of the appeal to me. Of course, the movie was actually only 40 years old then — and that first viewing of it was FIFTY years ago!

When we watched the movie THE NICE GUYS, which is set in the Seventies, I realized it was farther back in time for a 21-year-old viewer than CHINATOWN was for me when I watched it at 21. Time does have a habit of getting away from us.

Geez, you guys are depressing me with this "it's been long since/than" stuff.

I liked the Tumithak stories that were in BEFORE THE GOLDEN AGE when I read them back in the early 80s.

I, too, have tried to read as much Kuttner as I can that hasn't been collected. I haven't read this particular story yet, although Haffner Press included it in THUNDER IN THE VOID.

I read "Pendulum" in HORRORS UNKNOWN, a Moskowitz anthology, also in the early 80s. That was an amazing anthology. Not only did it include "The Pendulum", an earlier and somewhat different version Bradbury had written on his own, but "Were-Woman" by C. L. Moore and "The Challenge From Beyond". The latter is a round-robin story by C. L. Moore, A. Merritt, H. P. Lovecraft, Robert E. Howard, and Frank Belknap Long.

HORRORS UNKNOWN made a lasting impression on me as a teenager, and I probably ought to give it a reread.