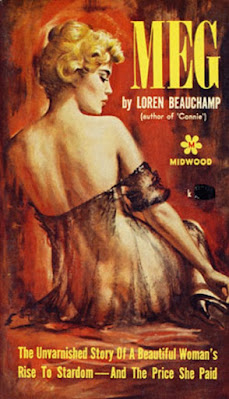 Sexy, redheaded, 19-year-old bombshell Meg Tandler loses her virginity to her farmboy beau, and that causes her to realize that if she doesn’t make a break, she’ll be doomed to marry such a dullard and live a bleak existence as a farm wife for the rest of her life. So she leaves the small town in Idaho where she grew up and heads for New York, determined to break into show business and make herself rich and famous.

That’s how MEG, written by Robert Silverberg and published by Midwood in 1960 under the pseudonym Loren Beauchamp, begins. And it’s a whirlwind that never really slows down after that. Almost before you know it, Meg is in New York and has a manager/agent who gives her a new name—Meg Loring. She wins a couple of beauty pageants, does some sexy but tasteful magazine covers and photo shoots, gets a screen test in Hollywood, signs a movie contract, and becomes a star. Oh, and along the way she sleeps with every powerful man who can help further her career. She’s made the proverbial journey from rags to riches, but of course, there are still a lot of pitfalls waiting for her in Hollywood . . .

The pace is so fast in this book, the plot developments so over the top, the characters so colorful, that MEG has something you don’t often find in Robert Silverberg’s soft-core novels: a really tongue-in-cheek tone and some genuinely amusing lines of dialogue, especially from Meg’s eccentric agent Max Bonaventura. Some of the Hollywood stuff is pretty funny, too, as many of the characters seem based on real-life figures in the movie business. It also provides a vivid, accurate portrait of the time period, the same way most of the novels in this genre do, at least the ones by the better writers.

MEG is certainly the most lightweight soft-core novel by Silverberg that I’ve encountered yet, and as such, it’s a nice change of pace and a very enjoyable novel. I thought the ending was a little lacking, but it’s still very much worth reading. It’s the second half of a double novel reprint volume coming soon from Stark House.