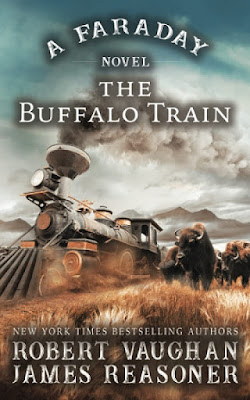 It started out as a silly idea to bring buyers back to Abilene. Wrangle some buffalo, put them on a train, and ship them to Chicago so folks back east could see the massive, shaggy beasts with their own eyes. The concept seemed sound. What could go wrong?

But for John Creed, agent for the famed Faraday Security Service, it was anything but simple. First, Hank Miles was willing to do whatever was required to prevent the plan from succeeding. Hiding in the shadows was a silent partner. Creed’s biggest threat, however, came from the man in black—an assassin who took pleasure in his work and would not stop coming until the job was complete.

Before the Buffalo Train reached the end of the line, guns would roar, men would die, and Chicago would get a taste of what the “Wild West” was really like.

(This is the first new Faraday book in many years and the first official collaboration between Robert Vaughan and myself. We've known each other for more than 30 years, have worked on many of the same series, and have had some input on each other's books from time to time. I think this is an excellent Western adventure yarn and hope some of you enjoy it.)

Posted by James Reasoner at 7:30 AM