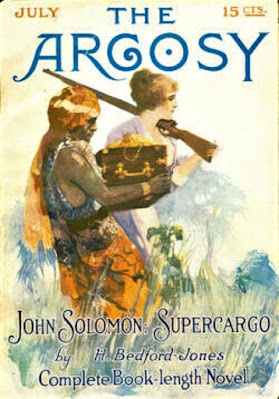 A while back I read THE GATE OF FAREWELL, the first novel to feature H. Bedford-Jones’ longest-running series character, the inoffensive-looking little Cockney ship’s chandler John Solomon, who is really much more than he appears to be. Now I’ve read JOHN SOLOMON, SUPERCARGO, the second novel in the series, and it’s another fine, early high adventure yarn from one of my favorite authors.

Originally published as a complete novel in the July 1914 issue of the iconic pulp ARGOSY, JOHN SOLOMON, SUPERCARGO once again features the title character in more of a supporting role. The actual protagonist is a two-fisted, down-on-his-luck American known as Cyrus Hammer. When he was still working as a stockbroker, before a personal tragedy ruined him, his name was Cyrus Murray, but during his fighting years as a hand on cattle boats coming from Africa to England, he’s acquired the name Hammer. He falls in with a down-on-his-luck English aristocrat, Frederick Harcourt, who still owns a yacht, the Daphne, but nothing else. Hammer and Harcourt team up to take a German archeologist and his entourage to a site in British East Africa where the professor intends to excavate the ruins of an old Portuguese fort. John Solomon shows up and signs on as the ship’s cargo officer.

As you’d expect, there’s a lot more going on than is apparent at first. Solomon, who is actually an adventurer/intelligence operative/shady character, has his own reasons for going along on the expedition. So does the beautiful daughter of another archeologist who was the German’s partner before his mysterious death. A murder on board the ship kicks off a series of plot twists, double-crosses, and adventures that culminates in those above-mentioned ruins with a fine, highly suspenseful scene.

At this point in his long, illustrious career, Bedford-Jones still isn’t quite the smooth stylist that he became later, so the prose in JOHN SOLOMON, SUPERCARGO is a little stodgy and old-fashioned at times, as you might expect in a novel first published 107 years ago. But for the most part, things perk along at a very nice pace indeed, with good characters and infrequent but effective bursts of action. Altus Press/Steeger Books is in the process of reprinting the entire John Solomon series, as well as many other H. Bedford-Jones novels and collections, and I give a high recommendation to all of them, including this one.

This sounds like an intriguing series. I will have to work it in.

Your timing on this post is a day late, though, James. Thursday was H. Bedford-Jones's birthday. :)