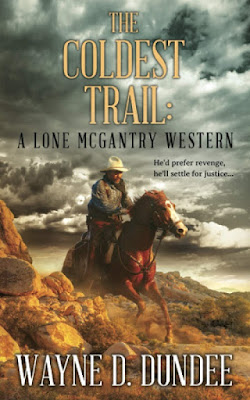 Wayne D. Dundee's latest Western novel, THE COLDEST TRAIL, is a direct sequel to his previous novel, THE FOREVER MOUNTAIN, taking up not long after that one left off. Lone McGantry has finished the dangerous task of laying the remains of his murdered partner to rest, and now he takes up the trail of the men responsible for killing the man and stealing the horse herd he and McGantry had on their ranch. Cold trail or not, McGantry is determined to track down the gang led by "the man with the burned face", as McGantry's partner told him before dying.

As always with a Dundee novel, you can count on a tough, stubborn protagonist, and Lone McGantry is one of his best. He's one of my favorite characters in the Western genre these days. You can also be sure that Dundee will pile a lot of trouble on the protagonist's head, and that's certainly true in THE COLDEST TRAIL. McGantry runs into plenty of obstacles and proddy characters during his quest, which also involves a stolen army payroll and a beautiful saloon singer known as Calamity Jane Jr.

Everything leads up to an action-packed final battle with McGantry's quarry that's one of the best I've read recently. It's great stuff, and very satisfying. Wayne Dundee is one of the best Western writers in the business, and you won't go wrong with any of his books. Highly recommended.