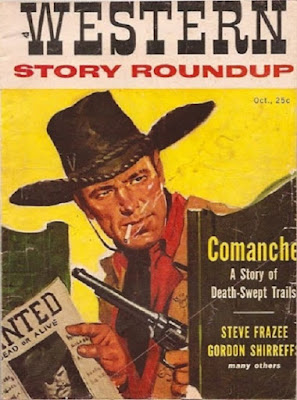 In 1955, the long-running pulp RANGELAND ROMANCES changed its name to WESTERN STORY ROUNDUP and eked out three more issues, of which this is the second. It has a nice cover by Ernest Chiriacka, a couple of top-notch Western authors in Gordon D. Shirreffs and Steve Frazee, the dependable Thomas Calvert McClary (writing as T. Calvert), and stories by Rod Lengel and Frazier Hunt (no, I've never heard of them, either). The story titles don't sound like Western romances, so I suspect they were just stories in inventory in Popular Publications' files, and those three issues of WESTERN STORY ROUNDUP were just a way of burning them off.
Posted by James Reasoner at 5:30 AM

Frazier Hunt (December 1, 1885 – December 24, 1967)[1] was an American radio announcer, writer and war correspondent during World War I and World War II. He wrote several books about his experience during both World Wars as well as historical biographies on famous Americans such as General George Armstrong Custer, Billy the Kid, and Douglas MacArthur.

Due to the story's title I guess that "Comanche" is referred to the mixed bay of Captain Myles Keogh ((25 March 1840 – 25 June 1876, I Troop of the 7th), the last known survivor of the ill-fated Little Big Horn battleground.

Steve Frazee was an outstanding writer. I don't think I've read a weak story by him. Like so many of the Western writers of his generation, he was a newspaperman.

I stand corrected--Frazee was not a newspaperman from what I looked up today.