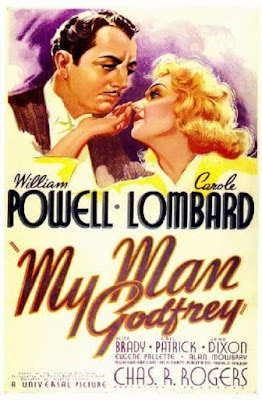 MY MAN GODFREY is one of those movies that played on TV all the time when I was a kid, but I never watched it until now. When it started, Livia and I both commented on what an inventive main title sequence it has, especially for the time period, as the names of the actors and filmmakers appear on the sides of buildings as the scene pans across a city skyline. It works really well.

The story itself opens with a group of homeless men, including Godfrey, played by William Powell. Let’s face it, William Powell is always going to look dapper and distinguished, even unshaven and wearing raggedy old clothes. Some rich society folks show up on a scavenger hunt, including a pair of sisters: cold, arrogant Gail Patrick and sweet but goofy Carole Lombard. Lombard winds up hiring Powell as the new butler for her eccentric family. Everybody learns lessons from each other. And then “Godfrey” turns out to be not quite what he appears to be.

This is an early screwball comedy, and as such, a not quite perfected example of the genre. A few goofy things happen, and there’s a lot of fast-paced-almost-to-the-point-of-incomprehensible dialogue, but it’s not really all that funny. The more dramatic aspects of the story actually work better, as the movie has some points to make about the Depression era in which it was made. As usual, Powell’s great. I’ve liked him in everything that I’ve seen. Eugene Pallette, who has become one of my favorite character actors, is on hand as the long-suffering patriarch of the society family. I have to admit, I’m not much of a Carole Lombard fan, and she didn’t win me over in this movie. There’s nothing wrong with her, it’s just that she’s overshadowed by icy-but-beautiful Gail Patrick as the unsympathetic sister. It may be sacrilege to say this, but I almost wished Godfrey had wound up with her instead of Lombard’s character.

And where the hell was Charles Lane? Isn’t it a rule that Charles Lane has to be in every movie like this?

Anyway, I enjoyed MY MAN GODFREY and I’m glad I finally watched it. It’s well worth the time. It has a reputation as one of the best films of all time, and for me, it doesn’t reach that level, but it’s still a really nice movie from one of the various Golden Ages of Hollywood.

Well, Lane was in NOTHING SACRED with Lombard the next year (1937). Does that count?

I love this movie and have watched it many times.

Such a great movie. If I wasn't so busy "discovering" Have Gun-Will Travel, I'd be watching this one again right away.