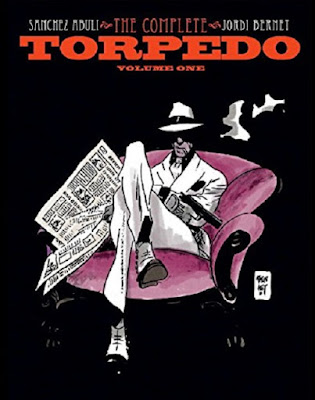 I remember reading a few issues of an independent comic book called TORPEDO 1936 back in the Eighties, but I hadn’t thought about it for years until one of this blog’s readers mentioned it in a comment on a recent post. After doing some checking, I was a little surprised to see that the book’s entire run has been reprinted and is available in digital form, so I picked up the first volume to revisit it.

The protagonist (you can’t call him the hero) of TORPEDO 1936 is Luca Torelli, a killer for hire who plies his deadly trade in New York during the Depression. He works for the mob but also takes on private commissions, and he’ll kill just about anybody as long as the price is right. Unlike other hitman characters such as Lawrence Block’s Keller and Max Allan Collins’ Quarry, Torelli has no redeeming qualities whatsoever. He’s every bit the despicable character you’d expect a professional killer to be. The only other continuing character is his sidekick/assistant/comedy relief, an oafish gangster known as Rascal.

Originally this series was supposed to be written by Will Eisner, creator of The Spirit and other acclaimed comics. How much input he might have had, I don’t know, but he never wrote any of the stories. The scripts are all by a Spanish comic book writer, Enrique Sanchez Abuli. Legendary comics artist Alex Toth drew the first two stories, then left the series, supposedly because he didn’t like the violent, nihilistic bent of Abuli’s scripts. Jordi Bernet took over the art, and his work on this series is fantastic. His style reminds me very much of Joe Kubert’s artwork.

THE COMPLETE TORPEDO, VOLUME ONE is very episodic, with each tale serving as a separate short story, another killing that Torelli sets out to accomplish. Some have clever plot twists. Torelli isn’t infallible, and sometimes he gets outwitted. Some are darkly humorous, but most are just bleak. A couple are flashbacks to Torelli’s life as a young Italian immigrant, maybe designed to give him at least a semblance of humanity, but if that was the goal, I’m not sure they succeed. He still comes across as extremely unlikable.

Which is not to say the stories are bad. The plots are repetitive enough that it’s best to read them spaced out, but they’re pretty effective when you tackle them that way. The ones where Torelli is up against low-lifes who are equally bad or even worse than he is are the ones that work the best. Overall, I enjoyed the book. Whether or not I’ll continue reading the collections, I just don’t know yet. Bernet’s art is gorgeous, and I’m curious to see if Abuli ever gives Torelli any real character development. So I’ll probably revisit TORPEDO 1936 again in the future. We’ll see.

Torpedo was in English? I think I read a few in French years ago, when I was lving in Montreal. French BDs (almost always in hardcover) imported from Europe were really big there, and there were quite a few crime and detective series I discovered that way. Jacques Tardi's adaptations of Leo Malet's Nestor Burma books (and other French crime writers) were the cream of the crop.