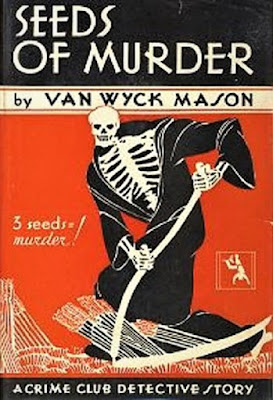 As I've mentioned in numerous posts, I was a huge fan of the secret agent boom in the Sixties, so I read and watched anything that had anything to do with espionage and adventure. Being on the lookout for such books was how I came across various paperbacks published by Pocket and Popular Library with titles like SECRET MISSION TO BANGKOK, HIMALAYAN ASSIGNMENT, and THE DEADLY ORBIT MISSION. The author was Van Wyck Mason and the books featured Colonel Hugh North, a globe-trotting agent of Army Intelligence who had battled despicable villains in colorful, exotic locations around the world and also got involved with beautiful women. In other words, I was very much the target audience for these books, and I picked up every one I came across. They were never on the same level as James Bond or The Man From U.N.C.L.E., of course, but I found them consistently entertaining.

I wasn't really familiar with Van Wyck Mason, but I worked in the local library at the time and had seen a lot of big historical novels by F. Van Wyck Mason, so I figured they were probably the same guy, or maybe father and son. I didn't really know then that not only were they the same guy, but Mason also had a long and prolific career as a pulpster, writing all sorts of adventure fiction for the leading pulp magazines.

Nor did I know how far back the Hugh North series went, until I came across a copy of the Triangle edition of a book called THE WASHINGTON LEGATION MURDERS. For those of you who are unfamiliar with the Triangle imprint, they were published by a company called Blakiston and were really, really cheaply made hardback reprints of popular novels. They were published in the Forties, and twenty years later, when I started coming across them in the Sixties, the pages were already brown and brittle and the flimsy cardboard covers were starting to come apart. But I loved them anyway, because they published so many books that I wanted to read.

But to get back to what I was talking about, THE WASHINGTON LEGATION MURDERS, published originally in 1935, was also by Van Wyck Mason and featured Hugh North, but he was younger and just a captain. I remember liking the book a lot, but even though over time I discovered that there were a bunch of earlier books in the series where North functions primarily as a detective, not a spy, I never really sought them out, although I read all the later ones where he was a secret agent.

Recently, however, I decided to backtrack all the way to the first book in the series, SEEDS OF MURDER, published by Doubleday in 1930. (Ah, we're finally getting to the real subject of this post!) It's very much a fair-play detective novel in the classic style, not an espionage adventure at all. But I enjoyed it a great deal anyway.

I was a little surprised to discover that the novel has a Watson who narrates it and takes part in the action, Dr. Walter Allen, who served with North in the Great War. Both men are guests at the ritzy New York estate of wealthy stockbroker Royal Delancey. Dr. Allen, in fact, is a former beau of Delancey's beautiful wife Phyllis. Also on hand are Delancey's business partner, a former business associate from the Philippines, Phyllis Delancey's ne'er-do-well brother, and a couple of beautiful young women, one of whom may or may not have a secret reason for being there. Also, assorted servants who hail from the Philippines. Oh, and there's a caravan of gypsies in the vicinity of the estate, as well.

We've all read this sort of book before, so it's no surprise that somebody winds up hanged, an apparent suicide, but was it really murder? Then another body turns up with a Chinese dagger buried in its back. Both bodies are found with an odd arrangement of mysterious seeds nearby. What could that possibly mean?

It seems to me that the appeal of books like this rests on two things: the skill with which the author constructs, and then deconstructs, the puzzle of the murder(s), and the interactions among the characters. If you're going to write a book in which there's little or no action and the whole, or almost the whole, thing consists of people sitting or standing in rooms and talking, then those conversations had better be pretty damned witty and/or interesting. I'm happy to report that Mason does a fine job of this. North is a likable detective, and Allen makes a very good narrator. The other characters, stereotypes though they may be, come to life pretty well, too.

The plotting isn't quite that strong. Mason conceals just a little too much from the reader for it to be entirely fair-play. I had the killer picked out well before the final revelations, but it was just as much a guess as it was a well-reasoned deduction. But then, I never claimed to be a detective. The whole thing fits together well enough to be satisfying, although it falls short of making me slap my forehead and exclaim, "D'oh! I should've seen it!"

All in all, I found SEEDS OF MURDER to be a lot of fun to read. Some of that may lie in nostalgia, because I read this sort of mystery novel very often when I was young. But Mason was a good writer with a very smooth, entertaining style and had me turning the pages at a good clip. The entire Hugh North series is available in e-book editions, and while I probably won't reread any of those later ones I read fifty years ago, I may tackle more of the early ones. I'd like to see if they get more action-packed.

Posted by James Reasoner at 5:17 AM

They had some great dust jackets in those days too. I like this one a lot.

Back in the early '70s I worked in Greenwich Village and used to walk over to Fourth Avenue at lunchtime, where the last two or three secondhand bookstores were holding on. I remember buying a bunch of Erle Stanley Gardner's early Perry Masons and his non-series books, and several were in those Triangle editions you mentioned. Superficially, they looked like the original editions, but they were falling apart. These were interesting to me because a previous owner, had pasted the covers and blurbs from other editions inside some of the books. I just wanted to read them and they were cheap, so I bought them, as I wasn't looking for collectible condition, just content.

Van Wyck Mason, and F. Van Wyck Mason, they're the same guy, a very good author.
Pulp Fiction
This early work of adventure stories started with The Fetish Of Sergeant M’Gourra during May 1928 and continued until he started his more serious historical fiction during 1938. He published stories involving war, jungle settings, the French Foreign Legion, and historical adventures. Several of these early historical stories were rewritten and published as paperback originals during the 1950s. (WikiPedia).
https://en.wikipedia.org/wiki/F._Van_Wyck_Mason_bibliography

I've read most of the Hugh North series,all of the post WWII novels, and a lot of the earlier ones. Some of the solutions to the puzzles are very well done. I always like the vintage CSI stuff that North did.