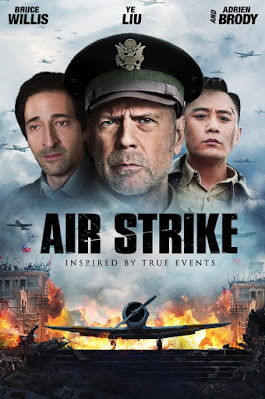 AIR STRIKE, a 2018 Chinese/American production starring Bruce Willis as an American pilot training and commanding the Chinese air force in the early days of World War II, has some of the worst reviews I’ve ever seen on IMDB. It’s propaganda, they say, showing how brave and noble the Chinese were in their battles against the Japanese. Yeah, maybe so . . . but the Chinese guys who wrote it must have watched every American war movie made during the Forties, because that’s exactly how it plays, complete with soap opera, comedy relief, and a lot of stirring action as the Chinese pilots fight to protect their homeland from Japanese bombers. There’s also a plotline about how one of the pilots, grounded because of injuries, becomes an intelligence agent and is tasked with delivering a vital code-breaking machine to its destination.

As with a lot of Bruce Willis movies these days, he gets top billing but is actually playing a supporting role. He’s on-screen for fifteen or twenty minutes, total. But that’s more than his daughter Rumer, who’s third-billed but has only one scene that lasts maybe thirty seconds. Adrian Brody, the only other actor in the cast you’ll recognize, plays a doctor and fares a little better, but he’s not around much, either.

AIR STRIKE suffers from some muddled storytelling, but the action scenes, although pretty heavy with CGI, are effective. I found myself interested in the characters and their storylines. It’s certainly not a great film, but I don’t think it’s as bad as the reviewers make it out to be. An enjoyable time-waster, let’s call it, and I don’t mean that to be damning with faint praise. Sometimes that’s plenty for me.

This sounds as if the movie is like most things that come out of China: