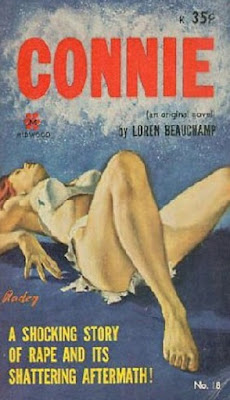 I’ve read a number of Robert Silverberg’s soft-core novels written under the Don Elliott pseudonym, but until now I’d never read any of his Midwood books written as Loren Beauchamp. CONNIE is an early Midwood, originally published in 1959, the same year Silverberg began his long run as Don Elliott for William Hamling’s Nightstand Books (and its other assorted imprints). The cover of the original edition is by Paul Rader.

Not surprisingly, Connie is the name of the protagonist, 17-year-old Connie Barrett, a pretty girl living in Brooklyn with her parents and about to get engaged to her high school sweetheart, who is off in his freshman year at Syracuse. One night she goes out to mail a letter to him, not really worrying because the mailbox is just down the street . . .

Of course, that proves to be a mistake, as Connie is kidnapped and gang-raped by a gang of juvenile delinquents. She survives but her personality is changed forever. Her parents send her to stay with her grandparents in Phoenix, but hardened and embittered, she runs away to San Francisco and becomes a high class call girl, soon having a lot of success in that sordid but lucrative racket. Then she meets a man who offers to take her away from it . . . but will she just wind up in the middle of something even worse?

As you might expect, and as Silverberg acknowledges in his foreword to an upcoming reprint of this novel from Stark House, CONNIE is not exactly a politically correct book. But it’s so well-written that it moves like the proverbial wind. Silverberg used the rape-and-its-aftermath plot in other soft-core novels, and as usual he doesn’t pull any punches in this one. His efforts in this genre are often pretty bleak. CONNIE is no exception. By the time it’s over, are there any glimmerings of hope left for its characters? 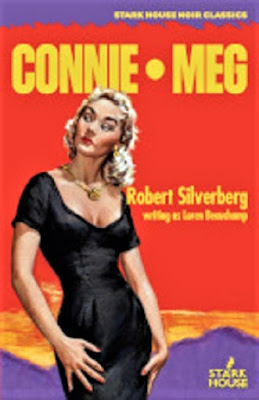 You’ll have to read it to find out, but I guarantee a fast-paced, engrossing yarn. I read it in two sittings, almost unheard of these days for little ol’ attention-span-challenged me. As mentioned above, Stark House is reprinting it later this spring in a double volume with another of Silverberg’s early Midwood novels as by Loren Beauchamp, MEG. All the Midwoods I’ve read have been good, no matter who wrote them. I’ll definitely be reading MEG soon, too, and then looking for more.
Posted by James Reasoner at 5:30 AM

Man, I don't even have time to read all the Silverberg books he wrote under his own name, but I still keep buying more...

I believe it's an impressive take on its kind of subject. And, wow, Greg Shepard's new package certainly improves on the Midwood...

You say his efforts in this genre were generally 'bleak,' but I would say that is a fairly accurate word to describe the majority of his science fiction as well. He is an amazingly talented writer but you don't exactly pick up a Silverberg book for a fun, light-hearted read....even his young adult stuff usually was a bit darker than most other authors.