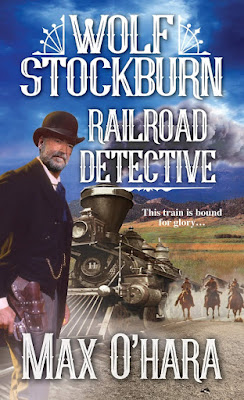 WOLF STOCKBURN, RAILROAD DETECTIVE introduces a new character and is the first in a new Western series from Kensington, and it’s a great debut. The first chapter, which details a bloody attack on a train by an outlaw gang known as the Devil’s Horde, is as fine an opening as I’ve read in a long time, and then no sooner is that done than the reader is introduced to the title character, Wolf Stockburn, a tough, veteran railroad detective who, as we come to find out, is haunted by a pair of tragedies in his past. He also has a dry sense of humor that reminds me a lot of Deputy U.S. Marshal Custis Long (better known as Longarm, of course), another of my favorite Western characters.

Stockburn sets out to track down the Devil’s Horde, and along the way he runs into a beautiful half-breed bordello owner who wears an eyepatch, a feisty, redheaded Wells Fargo express messenger, a beautiful blond star-packer, and as nasty an assortment of outlaws, gunmen, and killers as you’ll ever want to encounter in a Western novel.

Author Max O’Hara never lets the action slow down for long in this novel, and that action, along with the colorful characters and richly detailed settings, really kept me flipping the pages all the way to a spectacular and very satisfying climax. This is some great storytelling, and I had an absolutely fine time reading it, too. If you’re a Western fan, WOLF STOCKBURN, RAILROAD DETECTIVE gets a very high recommendation from me. It’s one of the best Western novels I’ve read in recent years.