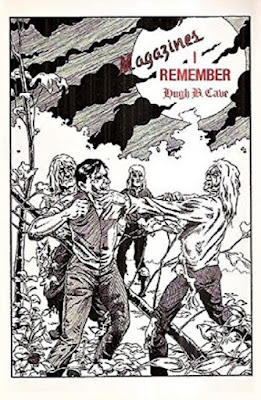 I consider myself fortunate to have traded a few emails with Hugh B. Cave before he passed away. Like nearly all of the old pros I’ve met or corresponded with, he was a true gentleman and always a pleasure to hear from. A legendary pulp writer who had a long, prolific career in their pages, Cave was unusual in that he moved on to other things and continued writing successfully all the way into this century.

His memoir, MAGAZINES I REMEMBER: SOME PULPS, THEIR EDITORS, AND WHAT IT WAS LIKE TO WRITE FOR THEM, published by Tattered Pages Press in 1994, touches on all phases of his career, not just the pulps, despite its subtitle. Most of it is drawn from a decades-long correspondence between Cave and fellow writer Carl Jacobi. The letters from the Thirties, full of news about stories they had written, sales they had made, and the changing landscape of magazines, editors, and agents, is a fascinating look into the pulp industry. Cave was prolific, though never a million-words-a-year man like Arthur J. Burks, and when he writes about how it was to make your living that way, you know he knows what he’s talking about.

But equally interesting are the sections about writing dozens of stories for the high-paying slick magazines, non-fiction books about World War II and about Jamaica (where Cave lived and operated a coffee plantation for a number of years), and finally his later career when he wrote many horror, fantasy, and dark suspense stories for various small press magazines and anthologies, along with a number of horror novels for Avon, Dell, and Tor. And that doesn’t even include the horror novels he wrote for Leisure after this memoir was published. Several times in his letters, Jacobi mentions that he doesn’t understand why Cave was still writing so much for markets that paid only a fraction of what he had earned from the slicks.

Cave’s answer is simple: He’s a writer. So he writes. And he writes for the markets that are available to him. It’s that attitude that makes me admire Cave and causes me to be glad that I knew him, if only briefly.

Jacobi, on the other hand, in his later years comes across as a man very much out of his time who tries to adjust to change but can’t quite do it. I’ve read very little of Jacobi’s work over the years, but after reading Cave’s memoir, I’m more interested in him and his career. I have a copy of LOST IN THE RENTHARPIAN HILLS: SPANNING THE DECADES WITH CARL JACOBI, a biography/bibliography by R. Dixon Smith, and I may read it in the near future, along with a couple of collections of Jacobi’s stories I also own. But more about that later. For now, let me give a very high recommendation to MAGAZINES I REMEMBER. I’ve been meaning to read this one for years, and I’m glad I finally got around to it.

I started to read this some years back, but don't remember what distracted me before I got too far...of his novels, the only one I have is THE CROSS AND THE DRUM, one of his Haitian books...have consistently enjoyed his horror stories over the years, less a fan of his "shudder pulp" stories (but his are among the least bad of that mode I've encountered).

Just read this wonderful piece. Thank you for posting it. I have long wanted to read this book by Hugh B. Cave. I have read and enjoyed a few of his stories. I can recommend Carl Jacobi too, the collections of his short stories are worth checking out.

Hugh Cave has always been a favorite. The best weird menace writer in my opinion. And his later career horror was wonderful also, such as Evil series. Fisherman Four is also an example of excellent young adult outdoor lit.

This is an excellent book and a good book for anyone who likes the work of Hugh B. Cave. Have you ever read "Cave of a Thousand Tales" by Milt Thomas? Another good one to have.