Forgotten Books: No Angels for Me - William Ard 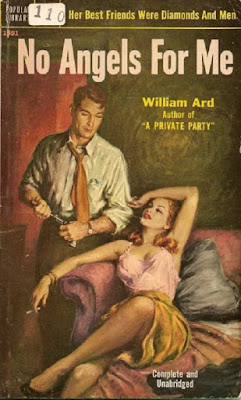 (This post originally appeared in somewhat different form on August 18, 2006.)

I was in the mood to read a vintage hardboiled paperback, and this is what came to hand. I'd never read any of William Ard's mysteries before, but years ago I read all the Westerns he wrote under the name Jonas Ward. He created the long-running Buchanan series and wrote the first five books featuring the character (one of which was made into a movie starring Randolph Scott). Ard died during the writing of the sixth book, which was completed by Robert Silverberg, and then the series was continued by Brian Garfield (one book) and William R. Cox (all the others), with Jonas Ward becoming a house-name.

But I'm getting off the subject here. I knew that Ard wrote mysteries as well as Westerns and have half a dozen of them on my shelves, including NO ANGELS FOR ME. The hero of this one is New York private detective Luke MacLane, who works for the All-States Detective Agency rather than being a loner PI like so many. But all the other usual elements of the genre are here. The book opens with MacLane identifying the body of a fellow PI for All-States who had been on the trail of some stolen diamonds. Vowing vengeance for his friend's murder, MacLane sets out to track down the killer as well as the loot from the diamond heist. Along the way, assorted beautiful women in varying stages of undress throw themselves at him, he gets hit on the head, drugged, and taken for a ride, and there are double-crosses galore.

This sounds pretty hokey and cliched now, but it probably wasn't in 1954, when this book was published. I enjoyed it quite a bit. There are some nice turns of phrase here and there, the action scenes are good, and even if beautiful women really don't throw themselves at private eyes all the time, I want to believe they do. I wouldn't hesitate to read another of Ard's mystery novels.

Posted by James Reasoner at 5:45 AM

Ard was a really good writer. Taken way too soon.

I wonder what his work would have looked like had his career progressed like so many of his contemporaries. What would and Ard Men's Adventure book be like?