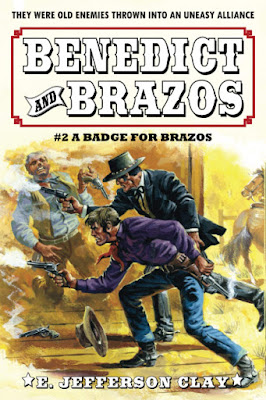 A while back, I read ACES WILD, the first novel in the long-running Benedict & Brazos series by E. Jefferson Clay, actually the extraordinarily prolific Australian author Paul Wheelahan. I thoroughly enjoyed that one, so there was no question I’d read the next one, A BADGE FOR BRAZOS. Several people have mentioned that this series gets better as it goes along, and so far I’ve found that to be true. A BADGE FOR BRAZOS is a very entertaining Western novel.

In case your memory needs to be refreshed, the two protagonists of this series set shortly after the Civil War are former Union officer Duke Benedict and former Confederate sergeant Hank Brazos. The two met during the war, fought first against each other and then on the same side against a gang of renegades who stole a fortune in Confederate gold. Even though there’s a lot of friction in their relationship, Benedict and Brazos have teamed up to hunt down the varmints who stole that gold. Benedict is the slick one of the pair, a handsome, fast-on-the-draw gambler, while Brazos is bigger and more of a rough-and-tumble brawler.

When they run short on funds, they come up with a scheme where Brazos will go into a town without any lawman, pretend to kick up a ruckus, and then Benedict will ride in and “subdue” him, thereby prompting the grateful citizenry to offer him the job of marshal, which he’ll hold down until they have enough money to move on again and continue their quest for the stolen gold.

However, through a series of unexpected events, Brazos is the one who winds up wearing a lawman’s badge, and because of that, our heroes find themselves in the middle of a shooting war between the crew from a local ranch and a group of miners working a silver vein that’s just about played out. Not surprisingly, more is going on that is obvious at first, and there are hidden villains to be uncovered. Also on hand are a beautiful librarian, a world-weary gunslinger, and a female saloon owner tougher than any of the men thereabouts.

There’s nothing in the plot of A BADGE FOR BRAZOS that will surprise anybody who’s read many Westerns, but Wheelahan writes well overall and has an extremely likable pair of protagonists. He’s also a master at pacing, keeping the action moving along at a very fast clip and wrapping things up with a huge, very effective gun battle that also features some poignant moments.

These books remind me very much of episodes in the various Western TV series I grew up watching in the late Fifties and early Sixties. I loved those sorts of yarns then, and I still love them now. So A BADGE FOR BRAZOS gets a big recommendation from me, and I look forward to reading the next one. This series is available in e-book editions from Piccadilly Publishing and in handsome trade paperbacks from Bold Venture Press.

Yes enjoyed this one far more than the first. Haven’t read number 3 yet but will. Gotten sidetracked on some Race Williams.