The Wild Adventures of the Spider: Fury in Steel - Will Murray 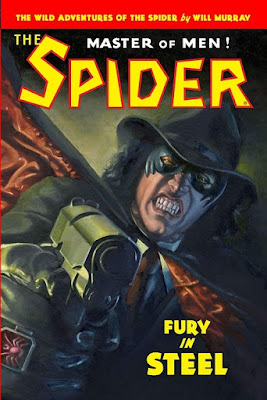 I’m sure I’ve mentioned before that my introduction to The Spider was in 1969, when Berkley Medallion reprinted the first two books in the series, THE SPIDER STRIKES and THE WHEEL OF DEATH, both by R.T.M. Scott. They released these in an odd, “buy one, get one free” scheme which saw the two paperbacks bound together with a paper band around them. I bought them off the spinner rack in a drugstore in Stephenville, Texas. My mother and I were on our way to my aunt’s house in Blanket, Texas, and I usually talked her into stopping at that store in Stephenville because they had good paperback and comic book spinners, as well as a big magazine rack where I saw some of the late issues of RANCH ROMANCES but didn’t buy any because I was spending my money on paperbacks like those two Spider novels.

Anyway, to get back to the subject at hand . . . Berkley reprinted a couple more Spider novels, these by Norvell Page writing under the house-name Grant Stockbridge. Page was far and away the most prolific Spider author and really defined the series’ tone with his wild, over-the-top plots and almost non-stop action. The problem is, I never saw those paperbacks. They just didn’t show up in any my usual book-buying haunts. It was more than a decade before I read any more of the Spider series, although by then I had read quite a bit about it. A few more reprints started trickling out in the early Eighties, a trio of trade paperbacks published by an outfit called Dimedia, and I found an issue of the actual pulp in a thrift store, and I picked up used copies of several novels published by Pocket Books that had been rewritten and “updated” but still retained some of the pulp feel. More actual reprints followed, some in mass market paperback, some in facsimile editions from small press publishers, and I read most of them. I’m not a Spider expert—I’ve read maybe half of the series in one format or another—but I always enjoy the character and his wild exploits.

Which brings us to The Wild Adventures of the Spider, a series of brand-new novels by pulp expert and fine writer Will Murray. The first one, THE DOOM LEGION, guest-starred two other characters from Popular Publications pulps, G-8 (the Flying Spy) and Operator 5, Jimmy Christopher his own self. I loved it. Murray’s latest Spider novel, the recently released FURY IN STEEL, also has some guest stars, in this case Emile C. Tepperman’s intrepid trio of fast-shooting FBI agents, the Suicide Squad: Johnny Kerrigan, Dan Murdoch, and Stephen Klaw. I’ve read half a dozen of Tepperman’s Suicide Squad stories, and they’re great. So seeing them in the same book with The Spider was a big draw for me. They don’t exactly team up—in fact, for most of the book the FBI agents are trying to arrest Richard Wentworth and in fact succeed in doing so at one point—but their efforts against an invasion of New York by giant killer robots makes for some great reading.

That’s right, giant killer robots that can bite off a man’s head, tear him limb from limb, and, like steel termites, gnaw away the foundations of skyscrapers to bring them crashing down. Another week, another apocalypse in the Big Apple, a crazed scheme by another villain to wreak havoc, panic the nation, and cause the deaths of thousands. And the only one who can stop it, of course, is The Spider.

FURY IN STEEL is just pure fun from start to finish. The plot is well-structured, flowing smoothly from great action scene to great action scene, Murray’s prose captures the frantic tone perfectly, and he has a keen sense of the absurd, pushing the boundaries but always stopping short of letting things get silly. I enjoyed this novel a great deal, and if you’re a fan of The Spider, or just a fan of wild pulp adventures in general, I give it my highest recommendation.

First, I always enjoy hearing stories of how you discovered these various books in the 1960s during your youth. It's your origin story.

Second, as someone who is familiar with the character (i.e., I know there's a character named The Spider) but has never read any of the novels, you had me at "giant killer robots."

There's a lot of stuff I can't seem to write about without wallowing in nostalgia first, and that tendency gets stronger the older I get. So I'm always happy to know that people don't mind me reminiscing.

Reminiscing is good and interesting. Every time I reread Edgar Rice Burroughs, I think about how I skipped lunch in grade school to save the 50cents (or maybe 25 cents) to buy one off the 5 and 10 spinner. I saw Doc Savage’s at Caldors but was scared off by the covers.

Page’s Spider novels are so enjoyable. Everything is over the top and they go at a breakneck speed. Think I have read every Suicide Squad story. Very different than Spider, mainly wartime spies as I recall. But fun also. Much better than Tepperman’s Spider tries which were a pale shadow of Page.

I don't think I've read any of Tepperman's Spider novels, but I really liked the Suicide Squad stories I've read. His Ed Race stories are kind of hit-and-miss for me, but usually they're pretty good, too, and I liked the Secret Agent X stories by him that I've read. His magnum opus, surely, is the Purple Invasion storyline from Operator 5. I have all of those and read the first one years ago, really liked it but never carried on with the series. I'd have to reread it now before reading all the others, but that's something I plan to do one of these days. It may have to wait for retirement, though.