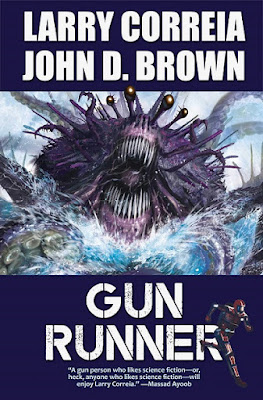 Years ago, I read several novels in the long-running BattleTech science fiction series, tales about a galaxy-spanning conflict between rival clans, fought mostly by giant robots piloted by humans who controlled them from a cockpit within the robot’s body. Kind of like giant tanks that could run around and punch each other in addition to firing all sorts of futuristic weaponry. I even wrote a BattleTech novella when the publisher had an open call for an anthology, but it didn’t sell and has since been lost.

This was my first real exposure to the concept of mechs, which has become a popular element in science fiction. I don’t know where the idea originated. Anime, maybe? Was that the idea behind Robotech? All that’s too long ago; I can’t remember anymore.

But I digress. Folks love them some giant robots. I just read GUN RUNNER, a recent novel by Larry Correia and John Brown, and it’s a fine example of the genre, plus plenty more to boot. It takes place in a future where humanity has spread out from Earth, using artificially constructed gates in space to travel faster than light and colonize hundreds of planets in distant solar systems. The protagonist is Jackson Rook, a young man who pilots a battle mech in a civil war on his home planet. Jackson is one of those rare individuals whose brain is suited to being directly hooked up to the mech he pilots, so the giant battle machine responds directly to his mental commands instead of him having to use physical controls like most mech pilots. This backfires on his him when the enemy takes control of his brain and uses him as a weapon against his own allies.

This is back-story established in a prologue in which the captain of a smuggling spaceship rescues Jackson from his tragic fate. Jackson goes to work for this captain, who supplies weapons and other supplies to various planets where they’re otherwise unavailable. Jackson can still pilot mechs manually, although he won’t allow himself to be hooked up mentally to one anymore for fear that his brain will be taken over again. Of course, when the ship delivers a state-of-the-art mech known as a Citadel to a backwater planet ruled by a dictator and Jackson happens to fall into the hands of the outnumbered rebel faction, most readers are going to have a pretty good idea what’s going to happen sooner or later.

As with traditional Westerns, though, the appeal of a book like this is not so much the plot but the skill with which the author, or in this case, authors execute it. And Correia and Brown do an excellent job of making GUN RUNNER a fast-paced science fiction adventure yarn. In addition to the mech angle, there are cyberpunk elements, several shadowy conspiracies that will no doubt bear fruit in sequels, lots of very likable characters and despicable villains, and giant, non-mechanical monsters roaming a planet where, as they say about Australia, everything wants to kill you.

With all that going on, it’s not surprising that it takes a while to get to the “giant robots whaling the tar out of each other” point, but when that epic conflict finally breaks out, it’s great stuff. I read this on my Kindle and couldn’t turn the digital pages fast enough during the last 25% of the book. GUN RUNNER is a very good book, one of the best I’ve read so far this year, and I’m looking forward to the next in the series. If you’re a fan of adventure SF with terrific action scenes and some fine worldbuilding and characters, I give it a very high recommendation.

Regarding mechs:
Definitely popularized from manga and anime, with Go Nagai's Mazinger Z the first pilotable mech. It really took off in the 80s with stuff like Gundam and the aforementioned Super Dimension Fortress Macross, which we got here in edited form as Robotech.

This 'mech boom' of sorts I can only surmise led to crafting the Battletech franchise in the 80s as well, with tabletop and eventually videogames like the popular MechWarrior franchise.

Most Japanese stuff isn't very practical or military-centric like Battletech or even Heinlein's Starship Troopers battlesuits; it's much more in line with 'giant robots are cool!' Not sure on your interest at all, but there was a few serious takes from Japan in the 80s in anime form, my favorite being Armored Troopers Votoms. There's also an interesting short series, or OVA, based on Starship Troopers as well.

Thanks for the info! I remember watching some Robotech stuff and have heard of Gundam, but that's about the extent of my knowledge. However, it looks like there are some Armored Troopers Votoms episodes available on YouTube, so I'll check them out. I want to go back and read more of the Battletech novels and have ebooks of some of them on my Kindle, just haven't gotten around to it yet.