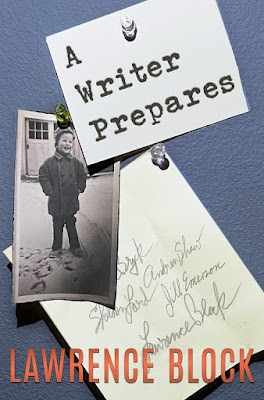 I’ve always been fascinated by writer’s memoirs. I’ve seen them criticized as being a series of “And then I wrote” recollections, but the best ones contain a lot more than that. Besides, I like reading about how certain books came to be written, the story behind the stories, if you will. This summer, Lawrence Block will release a memoir called A WRITER PREPARES, and I’ve been fortunate enough to read an advance copy of it. It’s a look at his college days and his early career as a writer, and how those two eras overlapped. He wrote a little more than half of it back in the mid-Nineties, then set it aside and never finished it until the past year. It makes for very interesting reading.

Some of this information I’ve seen before in introductions to various of Block’s novels and in published interviews with him, but there’s plenty that’s new to me, too. He doesn’t spare himself, going into some detail about personal failings, possibly unwise business decisions, and the various sorts of screw-ups that plague all of us. But he doesn’t dwell on those things and keeps the focus primarily on his writing. I especially enjoyed the section about his brief stint working in the mail room of Pines Publications, publisher of some of my favorite Western pulps. Next time I pick up an issue of RANCH ROMANCES from 1956, I’ll think that Block may have been wheeling a mail cart around the editorial offices when that issue was being put together.

There’s a lot of material about his time working for the Scott Meredith Literary Agency, his breaking into print with novels for Harry Shorten at Midwood under the pseudonym Sheldon Lord, his prolific output for William Hamling’s various soft-core imprints under the name Andrew Shaw, and his time writing medical case history books (which were almost all fictional) for Monarch, Lancer, and other publishers. All this makes me want to read more of those early books, and luckily I can since Block has reprinted most of them in the past decade. There are also sections about his friendship with Donald Westlake and Bill Coons (who ghosted a number of the Andrew Shaw novels for Block) and other authors, editors, and agents. It’s a vivid portrait of one little corner of the publishing business from the mid-Fifties to the mid-Sixties.

A WRITER PREPARES ends at a logical point, when Block has pretty much left the pseudonymous work behind to concentrate on books under his own name. This is when he began his Evan Tanner series for Gold Medal, and as it happens, those Tanner books were the first ones by Block that I ever saw, bought, and read, picking up most of them from the spinner rack in Tompkins’ Drugstore, one of my regular stops for paperbacks and comic books. After that, I’ve kept up, more or less, with his career. So it’s nice to read about those early days. I really enjoyed A WRITER PREPARES. The e-book edition is already up for pre-order. I give it my highest recommendation. I’ve been doing that a lot lately. I’ve been on a run of really great books, and this is another one in that streak.

You didn't have to sell me. I've read all of Block's previous non fiction accounts and dozens of his books, so this is a no-brainer. I pre-ordered it.

I wasn't aware of this one, but I'm preordering it. Definitely one to move to the top of the TBR pile.

This looks like a must buy! But I'll wait for the print edition.