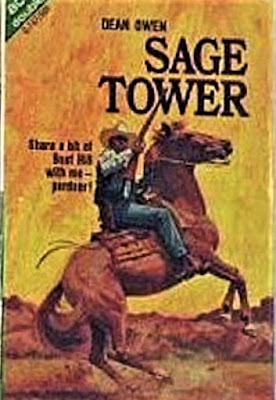 (This post originally appeared in somewhat different form on April 25, 2007.)

The title of this short novel isn’t a geographical reference, as I thought it might be when I first picked it up. Instead it’s the name of the hero. Published as half of an Ace Double Western (with Ray Hogan’s KILLER ON THE WARBUCKET on the other side), it has some of the best blurb page copy I’ve read.

There were three things that brought Sage Tower out of Texas:
an eight-sided goldpiece;
a dying Mexican woman;
a message reading: there are no flowers on Emilio’s grave.
If you can read that and not want to read the book, you’re made of sterner stuff than I am, compadres. As usual with a Dean Owen novel, the plot is complex, there’s a lot of back-story, and the characters are well-drawn. He packs a lot into a short (in this case, 118 pages) novel. Here we’ve got lust, revenge, buried loot, murder, gun battles, and several brutal, well-written fistfights, all in tough, lean, hardboiled Western style. This is a fine novel and only makes me want to read more of McGaughey’s books.
Posted by James Reasoner at 5:48 AM

On those Ace Doubles, the shorter story was the better story more often than not.