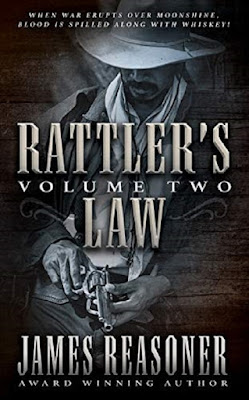 Wild Bill Hickok may be gone, but Abilene is still a wild and woolly cowtown in need of a strong marshal to bring law and order to its streets. That man is Lucas Flint . . . a legendary lawman sometimes known as the Rattler because of his swift and deadly speed with a Colt .45. Together with his deputy, dashing young gunfighter Cully Markham, Lucas Flint will take on any challenge that threatens the safety of the town and its people that he’s sworn to protect.

As a blizzard rages on the Kansas plains, an old buffalo hunter is caught in the crossfire between a Sioux war party and a clan of bank-robbing killers. A fortune in Confederate gold lures outlaws to Abilene. A young gunslinger bent on vengeance has a startling secret. A prize bull, a hard-bitten rancher, and a gang of thieves prove to be an explosive mixture for Cully Markham. A deadly Fourth of July celebration provides more than one kind of fireworks. A man sworn to uphold the law instead launches a reign of terror. A trio of mail order brides arrives in Abilene, but they bring flying lead rather than matrimonial bliss.

Posted by James Reasoner at 2:23 PM

The “About”. Indicates the volume has 8 novels. However, I found only 4.