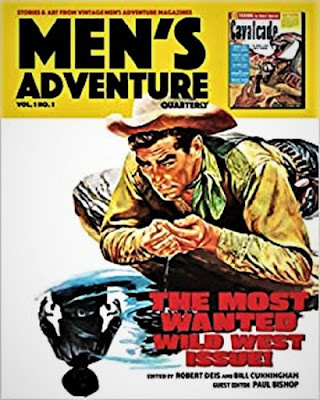 Nobody knows more about the Men’s Adventure Magazines, those lurid mixtures of fact and fiction that were common on newsstands and magazine racks in the Fifties, Sixties, and Seventies, than Bob Deis. He’s teamed up with Bill Cunningham (and an assist by Paul Bishop) to produce a terrific new anthology series called MEN’S ADVENTURE QUARTERLY, each issue of which will focus on a different genre from the Men’s Adventure Magazines. The first one is out now and is loaded with Western stories and artwork from a variety of sources.

There are non-fiction articles about madams of the Old West and the TV series GUNSMOKE, but most of the contents are fictional, although some stories are based on historical characters such as Clay Allison and Buckskin Frank Leslie. Not surprisingly, my favorites are the tales by old pros Lou Cameron, Dean W. Ballenger, and Donald Honig. All the stories are well-written and entertaining, though.

Visually, MEN’S ADVENTURE QUARTERLY is a real treat. The production values are excellent, and it features dozens of magazine covers and interior illustrations by some of the top artists of the mid-Twentieth Century era. It’s a wonderful recreation of that time.

By the time I was trying to break into writing in the mid-Seventies, the Men’s Adventure Magazines were still around but mostly a pale shadow of what they had once been. I sent them dozens of stories anyway but never sold any. I’m sorry I didn’t crack that market, but I really enjoy revisiting it now. MEN’S ADVENTURE QUARTERLY gets a high recommendation from me. You can buy it on Amazon or directly from the publisher.

I have a copy of this first issue and it is impressive indeed. Highly recommended!