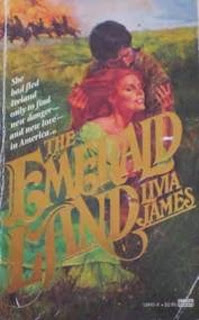 Since Friday falls on December 27th this week, I thought I'd combine my Forgotten Books post with my traditional December 27th post and talk about a book from very early in my career. THE EMERALD LAND has been out of print for 30 years, so I think it qualifies as forgotten.

For those of you coming in late, a quick word of explanation. I sold my first story on December 27th, 1976, so today marks 37 years as a professional writer for me. Of course, the story was actually bought earlier than that, in the offices of Ideal Publications in New York, but December 27th is when I got the check for it, which was the first I knew that it had been accepted. So that's the day I celebrate my anniversary as a pro. You can go back and check the December 27th posts in previous years if you want to learn more about that.

My first novel, TEXAS WIND, sold in the fall of 1979 (I don't remember the exact date; you'd think I would) and was published in October 1980. I was trying to sell other novels along the way, writing chapters-and-outline proposals for several of them that I don't even recall now. Livia and I managed to get an agent, Lea Braff, who had a literary agency along with Sharon Jarvis, who later became an editor at Ace, if I recall correctly. I believe Lea was representing Joe Lansdale at the time, and that Joe put us in touch with her. (If I'm remembering any of these details wrong, I'm sorry. It was a long time ago, and any correspondence from those days is long gone.) Livia and I wrote a proposal for a historical romance novel and sent it to Lea, and she promptly sold it to the first place she submitted it, Fawcett Gold Medal, which by that time was owned by Ballantine.

This sale was a big deal for us. The advance was pretty good: $8000. That was far and away the most we'd ever made from writing. With the first half of the advance in hand, and my regular job writing Mike Shayne stories for MSMM (300 bucks a month, doesn't sound like much, but we saved up and bought a used van with it, high cotton in those days), plus fairly regular short fiction sales to MSMM and various men's magazines, in January 1981 I was emboldened to quit my job running the office of my dad's TV and appliance repair business to concentrate solely on writing.

Nowadays I feel pretty bad about that decision for a number of reasons, one of which is that I was too young and inexperienced to be a full-time writer and didn't really take advantage of the opportunity. I had already finished the first draft of THE EMERALD LAND while still working at the TV shop, starting on it as soon as Fawcett made the offer and writing about 80,000 words in a crazed three-week stretch. Once I was working full-time at home, Livia rewrote the manuscript while I wrote Shayne stories, then we both polished it and sent it in. The editor at Fawcett who bought the book was Michaela Hamilton, but the person who actually edited it was Michael Ossias, who I never heard of before or since. He wanted some fairly extensive revisions, which in those pre-computer days meant that the whole manuscript had to be retyped. Once we'd done all the rewriting, covering the pages with handwritten revisions and new material, we embarked on a marathon retyping session, switching off at the typewriter and doing the entire book in one stretch from eight o'clock at night until six o'clock the next morning. Then we got some sleep, had a late breakfast, took the manuscript into Fort Worth to have it photocopied (pre-computer days, remember?), and shipped the original off to New York.

A couple of years later in 1983, the book was published under the wildly original pseudonym Livia James, the only time we've used that name. The cover was pretty good, and I was proud to have a book published by Gold Medal, even though it wasn't the "real" Gold Medal.

So what's the book about? It centers around the lives of this beautiful Irish girl and her family in the 1850s, first in Ireland, then in New York when they come to America, and finally Kansas after they head west to settle on a farm just in time for the bloody lead-up to the Civil War. There are dastardly villains, a couple of heroic mountain men, some romance and angst, and a considerable amount of action. In other words, it's the sort of historical soap opera that Livia and I have written on a number of other occasions in our careers.

Despite the decent cover I mentioned above, the book didn't sell very well. There were a lot of historical romances competing for rack space and readers' attention in those days, and "Livia James" was a complete unknown. It certainly didn't sell well enough that Fawcett clamored for another book from us. By the time it came out, I was working part-time in a comic book store owned by a friend of mine and writing as many short stories (some of which sold) and book proposals (none of which sold) as I could. We were about to branch out and start our own used bookstore, in hopes that would provide enough cash flow to keep us afloat while we continued trying to sell novels. That idea didn't work out, either. We ghosted a few books for friends, one of which paid pretty well but didn't lead to anything else, but by and large it was a dry spell that lasted for several years and was bad enough that I remember being excited when I got a $60 check from a men's magazine for a porn story. We had parted ways with Lea Braff, who was never a good fit for us as an agent despite her successful sale of THE EMERALD LAND, and had been with another agent for a while who wound up dropping us as clients after selling one book for us (a contemporary romance that remains unpublished to this day, and always will). In the mid-Eighties it looked like my career as a writer was going to come to a screeching halt less than a decade into it.

Of course it didn't, but that's a story for another time. To get back to THE EMERALD LAND, I've never reread it so I don't know how well it holds up, but I remember it as being fairly entertaining and I doubt that it's completely cringe-worthy, although I know we would do some things differently if we were writing it today. It's never been reprinted and likely never will be, but if there are such creatures as Reasoner completists who want to read it, there are used copies available on-line and none of them are expensive. (By the way, if there actually are any Reasoner completists, they're bound to be disappointed, because probably a third of my novels don't have my name anywhere on them and I'm contractually forbidden from claiming them. Just another of the odd turns my career has taken.)

So, 37 years in and I'm still at it, thanks to an enormous amount of help from Livia, our daughters, and any number of editors who had faith in me, from Sam Merwin Jr. to Gary Goldstein. I have no plans to retire, although I wouldn't mind slowing down a little. But there are still too many good books I want to write, so I hope I'm around for a while yet, turning out those pages.
Posted by James Reasoner at 6:00 AM

Great "origin" story. I can tell you that May 6, 1981 was the day I read TEXAS WIND, a copy I no longer have because the SOB I loaned it to didn't return it. (You'd know his name if I told you.)

Anyway, happy anniversary and I wish you many more productive years.

I still remember buying my copy of EMERALD LAND at the Kroger store in Brownwood, Texas. I don't remember much about the book except that I enjoyed it. Congrats no another anniversary!

Fantastic morning read, James. I always enjoy learning how people started doing their profession. Thirty seven years. Wow! And what, something like seven years in a row of a million words. Have you even took a stab at the total number of words you've/y'all've written?

I remember rushing to get that book revised, but I don't remember the reason for the rush. Editors have been known to ask for rush jobs for books that are then published a year later. I also remember breaking the letter S on the typewriter and there was no money or time to get it fixed. The heroine's name started with a S and so did the dog and the hero's last name started with a S. I discovered how frequent that letter showed up because I would manually lift the letter S and hit it with a hammer. Fun times.

Great post, James. I'll be on the lookout for THE EMERALD LAND!

I've forgotten the reason for the rush job, too. And that we busted our S on the typewriter. (I'm sorry.) I miss typewriters sometimes, but I'd sure never go back to them.

This is the ninth straight year of a million words or more. I'm still shooting for that next year to make it ten years in a row, but the way I've slowed down in the second half of this year I don't know if I'll make it. I don't know the total wordage of my career, but it's got to be close to twenty million.

December 12, 1980 was the date I read The Disappearance of Penny, Bob.

Congrats on the anniversary, James, and I wish you many more.

Wow you wrote a Mike Shayne novel?
I have a copy of The Blonde Cried Murder. Could not find any other copies in our local used bookstores.

I didn't do any of the full-length Shayne novels, but I wrote between 35 and 40 Shayne novellas that were published in MIKE SHAYNE MYSTERY MAGAZINE. I never can remember the exact number. Most of these were about 20,000 words. Some approached 25,000 words, and some were as short as 10,000, depending on how much time I had in my schedule. I had a wonderful time writing them. The ones I've reread don't hold up just great, but they're not terrible, either.

It just goes to show people that anyone can become an overnight success if they invest 10 years of hard work first. I love these stories.