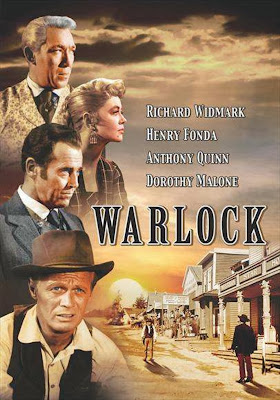 This is another of the Western DVDs Livia got for me, and another one that I'd never seen until now. WARLOCK starts out like it's going to be another version of the Gunfight at the OK Corral story, with the fictional town of Warlock standing in for Tombstone, and Marshal Clay Blaisedell (Henry Fonda) and his friend, gambler Tom Morgan (Anthony Quinn) being thinly disguised versions of Wyatt Earp and Doc Holliday. One of the cowboy faction who's been causing trouble in the area (Richard Widmark) even becomes sheriff, much like Johnny Behan in Tombstone. The character's name, Johnny Gannon, is even similar.

But from there, WARLOCK, based on a novel of the same name by Oakley Hall, goes off on its own tangents and winds up telling a considerably different story. Some characters you think will be sympathetic turn out, well, not so much. Heroic actions come from unlikely sources. And the final series of shootouts don't turn out to be the ones you'd expect, either.

This unpredictable storyline makes WARLOCK a pretty interesting movie. The cast, which also includes the beautiful Dorothy Malone and stalwart supporting actors DeForest Kelly and Whit Bissell, is also very good. I was never a Richard Widmark fan when I was a kid, but I've really come to enjoy his work. He brings a certain world-weariness to his roles that I don't think I appreciated when I was younger. Fonda is playing to a stereotype and seems to know it, using that familiarity to his advantage. And of course he'd played Wyatt Earp before, in MY DARLING CLEMENTINE.

The movie looks good, as well, and my only real complaint is that director Edward Dmytryck lets the pace lag a little too much in places, so that WARLOCK seems longer than it really is. It's also a movie that has several apparent climaxes, so you get fooled into thinking it's about to be over, and then it's not.

Overall, I enjoyed WARLOCK quite a bit. I'm not sure why I never saw it before, but I'm glad I watched it now.

With that cast I can't believe I have never heard of it.

This movie is very different from the usual western film and more complicated. A fascinating film, especially for a western. Time for me to watch it again.

I was always a Richard Widmark fan and I remember liking this but at this late date I must admit the details totally escape me.

I've not heard of this one, but based on your description, I'm going to have to track it down.

Have you read the novel? I've had a PB copy for more years than I care to remember, but suspect at this point of time I will never get to it. I'm with you on Richard Widmark as I didn't like him when I had to watch him when I was a teenager working in a theatre. Since then his acting has grown on me.

I like Widmark, even in off-the-wall casting like the brash Norseman in THE LONG SHIPS, but if memory serves, he was jarring in WARLOCK because the character he played was evidently supposed to be a younger man, and Widmark's style didn't fit the part. I may be misremembering. The best part, also in the novel, were the pair of gold-plated six-guns worn by Fonda's character, his equivalent of the Buntline Special. I think WARLOCK had the misfortune to come along when the adult-western movie genre (not to be confused with the adult western paperback genre) was almost played out.

I've never read the book, don't think I own a copy. But I didn't check to be sure. I might read it eventually but probably not any time soon. Once I've seen the movie, that sort of puts me off reading the book. Oddly enough, that doesn't happen the other way around.

I remember seeing this in the theatre when it was new, though it left no impression. Then a couple years ago I picked up the (long) novel and really enjoyed it. The film, which I saw again recently, is a major condensation and simplification of the novel which is full of ironies and raises issues about law and order on the frontier. Count me as another Widmark fan, as well.