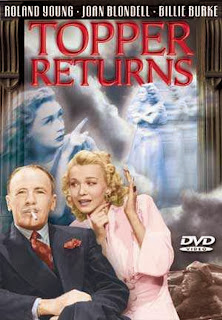 (This post originally appeared in slightly different form on June 19, 2006.)

My daughter Joanna is a fan of Cary Grant movies, so we picked up a DVD that has both TOPPER and TOPPER RETURNS on it. I always liked the Topper TV series from the Fifties, which I watched in syndicated reruns during the Sixties. I've read some of the novels by Thorne Smith, too. I'd seen TOPPER, but the last time was many years ago. Sad to say, watching it now, it hasn't aged that well. Cary Grant is always good, of course, and Roland Young was a good character actor. But the film, while whimsical at times, just isn't very funny and meanders along at a slow pace.

I'd never seen TOPPER RETURNS and didn't really know anything about it, so I was surprised when I saw that Cary Grant wasn't in it. In fact, the only actors who return are Roland Young as Cosmo Topper and Billie Burke as his wife Clara. The credits open with a mysterious shadowy figure and dramatic music, as if this is a mystery movie rather than a comedy. Then I see that the screenplay is by Jonathan Latimer, the hardboiled mystery novelist, and Gordon Douglas, better known as the director of numerous action-packed Western, mystery, and adventure movies. Needless to say, my interest perked up. TOPPER RETURNS is indeed a mystery movie (with humor) rather than a comedy. Topper himself is an incidental character for much of the film, which centers around two young women visiting the creepy old house that one of them is about to inherit -- if she can live long enough to do so. Early on it becomes obvious that somebody is trying to kill one of them.

If TOPPER was too slow, the same can't be said of TOPPER RETURNS. There's a heck of a lot packed into the movie's fairly short running time. We get Joan Blondell as a cute, brassy ghost; Carole Landis as the blond bombshell who's the intended victim of the murder plot; snappy, hardboiled patter from rugged Dennis O'Keefe; a masked killer who sports a slouch hat and cloak that make him look a little like The Shadow; George Zucco (the poor man's Bela Lugosi) as a sinister doctor; secret passages, trapdoors, and revolving walls; a cavern with a hidden boat landing (one of the sure signs, along with quicksand, of a really good movie); and to top it all off, a fine performance by Eddie "Rochester" Anderson, one of the greatest second bananas of all time. I had a wonderful time watching this movie.
Posted by James Reasoner at 5:30 AM

I agree, you can't go wrong with Rochester. Or Joan Blondell, for that matter.

I remember the TV show best. Loved it as a kid. So glamourous.

Many years ago, I rented a 16mm print of one of the Topper movies, maybe this one, and invited a bunch of people over for a movie night. Had a great time. Thanks for evoking the memory.