Upon My Soul - Robert J. Randisi 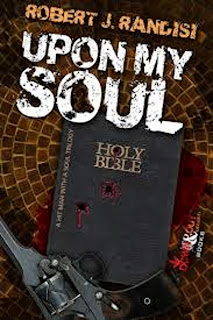 As many excellent hitman novels as there have been over the years—Lawrence Block's Keller series and Max Allan Collins' Quarry series come to mind—you wouldn't think there would be much left to do with the sub-genre. But you'd be wrong, as Robert J. Randisi's new novel UPON MY SOUL proves quite handily.

Sangster, the protagonist of this novel, was an efficient, highly skilled killer for hire until the morning he woke up and realized he had a soul. This discovery led him to retire from the business, and he's spent the last several years leading a quiet, peaceful life in Louisiana.

But people at that deadly level of the underworld usually aren't allowed to walk away, as readers of Peter Rabe's Daniel Port novels and Ennis Willie's Sand series (not to mention the Butcher men's adventure novels) know very well. Sangster's past catches up to him in bloody fashion, and he's forced to choose between preserving his new-found soul by honoring his vow not to kill again or avenging several brutal murders for which he feels some responsibility. It's a dangerous conundrum, and Randisi uses it to ratchet up a considerable amount of suspense.

As usual in a Bob Randisi novel, UPON MY SOUL is very fast-paced, but it's not quite as dialogue-driven as some and is a bit more reflective, which works very well. Sangster is an interesting and sympathetic protagonist, despite his ruthless background, and the supporting cast is good, too, especially a Jamaican cab driver in Las Vegas who becomes an unlikely ally and an elderly butler who is more than he seems. There are some nice twists in the plot as well.

UPON MY SOUL is a fine crime novel, and I'm glad to report that it's also the first in a trilogy. I'm looking forward to reading more about Sangster's continuing struggle for his soul.

I started reading this one last night. So far, so good.

What is your top three hitman novels?
Mine, probably:
1. The Butcher's Boy, by Thomas Perry
2. Quarry, by Max Allan Collins
3. Hit Man, by Lawrence Block

And check out Malcolm Mackay, a young writer from UK, who has recently written hitman trilogy.

Good list, Ray! It would be hard to top those. I must admit this new one sounds very interesting to me.

Check out Kevin Wignall from the UK,