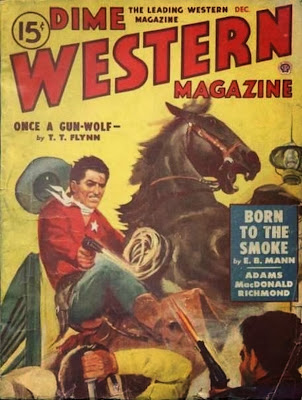 The December 1949 issue of DIME WESTERN has a really strong line-up of authors behind that cover. I was able to read this one recently, thanks to Karl Rehn, and it's a fine issue.

The lead novella is "Born to the Smoke" by E.B. Mann, an author I've meant to read before but never have until now. It's a save-the-ranch yarn, as cowhand John Brent is revealed to be notorious gunman John Brant and booted off the Lazy H, thus ending what he hoped would be a budding romance with the owner's daughter. Before Brant can leave the ranch, though, he's bushwhacked and roped into an effort to stop a gang of outlaws from taking over the place. There's one small twist in the plot, but other than that veteran Western readers will probably know everything that's going to happen. Mann's prose is smooth, though, and several excellent action scenes more than balance out any predictability in the story.

I never read much of Roe Richmond's work except some of the Jim Hatfield novels he wrote under the Jackson Cole house-name during the Fifties for TEXAS RANGERS. And I didn't care much for those. They were written well enough, but Richmond saddled Hatfield with a whole gang of sidekicks I didn't like. (Some of those Hatfield novels were later rewritten into Lashtrow novels and published under Richmond's name by Leisure, Zebra, and Ace.) So I didn't really know what to expect from his novelette in this issue, "Battle Call for Last-Chance". This tale of small ranchers caught between sheepherders on one side and a ruthless cattle baron on the other is very good. There's a small but effective twist in the story, and the action scenes are top-notch. I've never gone out of my way to read Richmond's work because of my dislike for those Hatfield novels, but maybe I was wrong about that.

"Gunsmoke Angelus for Mesa Grande" is by an author I'm not familiar with, William Benton Johnston. This is the last story of his listed in the Fictionmags Index. It's the familiar plot of an old enemy returning to town to settle a score with the hero, but the writing is good and the ending is a bit offbeat, so I enjoyed it.

I've been reading and enjoying Clifton Adams' work for a long time, probably starting with the novels he wrote about lawman Amos Flagg under the pseudonym Clay Randall. "Private Manhunt" is an excellent novelette about drifting cowpoke Matt Reynolds, who becomes involved in hunting down some stagecoach robbers because of a pretty girl. This story is in first person, something that's a little unusual for the Western pulps, but it works very well with Adams' terse prose. There's plenty of action, and the touches of dry humor here and there add to the appeal. Top-notch work all around.

The real surprise in the issue is the novelette "Nine Coffins for Rocking H". Not the story itself, which is a well-written cattle baron vs. homesteaders yarn, but because of the author, John D. MacDonald. I hadn't realized that MacDonald wrote any Westerns. But it's not really surprising that he did a few of them since that was still a popular market when he was making his living as a pulpster in the late Forties. This particular story has some excellent action scenes and is a bit bleaker than most Western pulp stories. I'm not sure MacDonald felt all that comfortable with Westerns, though. It has a certain by-the-numbers quality to it. But it's still a good story.

No surprise is that "Once a Gun-Wolf—" by T.T. Flynn is my favorite story in the issue. I don't think Flynn ever wrote a bad story. At least I haven't run across any so far. This one is an "outlaw trying to go straight and escape his past" yarn, and while the plot isn't surprising (except for one late twist I didn't see coming), Flynn's writing is so good it swept me along and easily kept me entertaining and engrossed. He's just one of the most solid Western writers I've encountered, in or out of the pulps.

DIME WESTERN is one of the best Western pulps overall, and even as late in the game as 1949 could still put out exceptional issues like this one on a regular basis. There's not a bad story in the bunch. In fact, they range from very good to excellent. It's issues like this that tend to spoil the pulp reader.
Posted by James Reasoner at 6:30 AM

Okay, perhaps you've mentioned this before, but where are you getting and reading these old mags? Are they available electronically? Are you scouring old bookstores and buying them?

You are right about DIME WESTERN being one of the best of the western pulps. Along with STAR WESTERN the two titles were the best western magazines for Popular Publications.

The covers were always action packed and done by the best artists. I recently was lucky enough to pick up two more DIME WESTERN cover paintings by Walter Baumhofer and Raphael Desoto. The yellow background was very distinctive and noticeable on the newsstands.

I'll leave it up to James to tell how he gets his pulps but ebay is a good source. In fact, I just checked Dime Western on ebay and there are 88 copies for sale, including one I desperately need!

Prices range all over but there are some priced at around the $10 mark, which is very reasonable.

Another source, I strongly recommend is Pulpfest, held every year during the summer in Columbus, Ohio. Over a hundred tables with thousands of pulps. Check out pulpfest.com.

My buddy Karl Rehn loaned me this one, and from time to time I borrow one from other collectors. But I have approximately 3000 pulps in my own collection. After the fire in '08 wiped out my original collection, quite a few people sent me pulps to replace them. I've also picked up a couple of good-sized lots from other collectors who were downsizing. Most of the ones I own are in storage at the moment, but I have approximately 500 on shelves in my office, and there are maybe 200 more in boxes in the bedroom. I probably have more pulps than I'll ever get around to reading (unless I actually do retire one of these days), but that doesn't stop me from buying one now and then on eBay. I also buy quite a few of the pulp reprints coming out now.

There are a lot of pulps available to read on-line. Check out unz.org for a start, and there are other sites that have scans of pulps, too.

Most of the scans I use on Saturday and Sunday morning come from the Fictionmags Index. Occasionally they're issues I've read in the past but no longer own. I'd love to just use covers from pulps that I own and have read, but between my own writing and editing and/or proofreading for Rough Edges Press, Western Fictioneers, and Prairie Rose Publications, I don't have much time to read pulps these days.

That said, I have an issue of NEW WESTERN sitting out where I can get to it easily whenever I can find the chance.