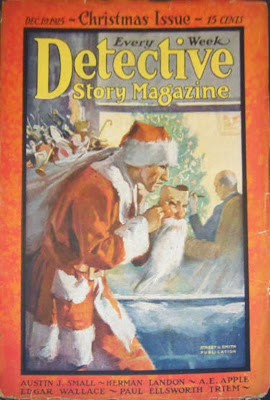 Uh-oh. Looks like Santa's up to no good. The very same week that the pulp featured in yesterday's post came out, another Street & Smith pulp with a Christmas-themed cover appeared. I found this scan on-line and the issue isn't listed in the Fictionmags Index, so you know as much about it as I do. Or possibly more, because the only name on the cover I recognize is Edgar Wallace, and I don't think I've ever read anything by him. But hey, it's a Christmas cover and it's three days until Christmas, so that's good enough, I suppose.
Posted by James Reasoner at 6:30 AM

I pulled out my copy of this issue and the note inside says I read THE GALLOW'S HAND by Edgar Wallace back in January 1988. It was a 6 part serial and I liked it. Edgar Wallace, like Max Brand, was very prolific so his work varies in quality.

I've read some of the other authors in this issue. Herman Landon had a long running series in DETECTIVE STORY about The Picaroon, who was a good guy crook. A.E. Apple wrote the very popular Mr. Chang series.

The Cover artist was John Coughlin who was an amazing painter. He did just about all the cover art for the magazine for a period of 20 years, 1915-1935. Since it was weekly he was doing 50 paintings a year plus all sorts of other covers for other magazines. I still have a couple cover paintings by him for DETECTIVE STORY and every time I look at them I wonder how on earth he managed to do it.

Always enjoy Walker's comments on the pulp posts here. Walker, write a book. I'd buy it in a sec! You always have worthwhile insights. I read a Mr. Chang maybe 50 years ago but never returned. I'm a Sax Rohmer man. I've read Edgar Wallace. For some reason, Brit editions or his work were in every bookstore and bookstand when I was in Germany in the 1960s. He's forgotten today. The James Patterson of his time. As for Austin J. Small, I believe this is a pen name for Joe Austell Small, who in later years manned the helm of True West and Frontier Times.

Austin J. Small (1894-1929) was born Austin Major Small. He was a UK adventure and thriller writer who published much of his work (at least in the UK) under the pseudonym "Seamark."

(Information courtesy of The Encyclopedia of Science Fiction.)

Triem (1882-1976) was an Iowa-born journalist and pulp writer who published in WEIRD TALES, DETECTIVE STORY, WESTERN STORY, CLUES, FAR WEST. He published at least one detective novel and three non-fiction books that combined psychology and quackery.

A brief bio can be found here:

British thriller writer Edgar Wallace was indeed still held in high regard in the 1960s, perhaps more in Germany than in his home country, although movie series based on his work were still being made in both countries. Edgar Wallace occupies a brief spot in my own career, as was recorded this year in issue three of the magazine illustrators, a sumptuous UK quarterly, which I believe is now available in the US. In 1964, while working as a writer and editor for Micron Publications Ltd, I persuaded the company to launch a monthly Edgar Wallace Mystery Magazine. There is a fascinating half-page black and white photograph in illustrators. Taken by a news agency, it shows a very youthful Keith Chapman presenting Edgar Wallace's children, Bryan Edgar and Penelope, with cover mock-ups of the new Wallace magazine at a West End, London, hotel function. The caption ends "Chapman was all of 21." And yes, Stephen, both the once-great Wallace (and the ever minor Chapman), are largely forgotten... Although Wallace is sometimes mentioned as the creator of King Kong!

Speaking of Edgar Wallace, I've been recently buying dvds from England based on his novels. I just ordered a big box set of over 40 films titled EDGAR WALLACE MYSTERIES. Of course I understand many of them are not really based on his work but he is still big in the UK.

I hope you enjoy the films, Walker. The back cover for a Micron issue of Edgar Wallace Mystery Magazine was always a still from the Anglo-Amalgamated Edgar Wallace film series with an inset caption. As commented in the illustrators article, "In a way, this free but effective content anticipated the later predominance of photographic illustration on the front covers of paperbacks. Older readers may remember the Wallace films, screened in British cinemas as the second, but often best, part of 'double features.' They began memorably with a bust of Edgar revolving in swirls of fog or smoke to the catchy strains of the twangy Man of Mystery theme by Michael Carr, which was made into a [UK] Top Ten record hit by The Shadows."

Thanks for that info, Jerry. I've learned things today, which makes it a good day.

You guys are making me think I need to read some Edgar Wallace.

James, I recommend that you give Edgar Wallace a chance. THE FOUR JUST MEN is one of his best known novels; it's about 4 men who decide to kill in the name of justice. Also THE MIND OF MR J.G. REEDER, a collection of some of his stories.

While The Four Just Men is probably his most famous novel, and while I’ve only read 9-10 of Wallace’s 100+ books, I found his prose clunky and dull, far closer to, say, the plodding Sapper than the fanciful Rohmer, if that makes sense. Walker’s right about The Mind of J.G. Reeder being a collection of fine Golden Age detective tales, though my favorite Wallace are his Sanders of the River stories, which (though politically incorrect as hell) probably best display those qualities of his work that made Edgar Wallace so popular.