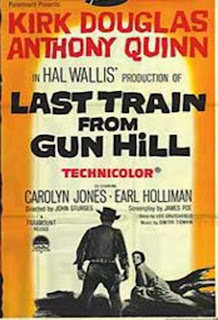 LAST TRAIN FROM GUN HILL came out in 1959, so it was probably sometime in 1960 that I saw it at the Eagle Drive-In. Other than knowing that I saw it, I didn't remember anything else about it until I watched it recently. A lot of it must have gone right over my head when I saw it the first time because I was so young. This is one dark and gritty Western.

It opens with a couple of cowboys, one of them played by a young Earl Holliman, raping and killing an Indian woman who turns out to be the wife of Matt Morgan (Kirk Douglas), the U.S. Marshal in a nearby town. The woman's son, who is with her when she's attacked, gets away on a horse belonging to one of the men, and the saddle on the horse allows Morgan to identify the killers. The markings on it tell him it belongs to cattle baron Craig Belden (Anthony Quinn), who just happens to be an old friend of Morgan's. Seeking vengeance, Morgan travels to the town of Gun Hill, which is owned almost completely by Belden. This movie doesn't really have any plot twists, so it quickly becomes apparent that one of the killers is Belden's son, and friend or no friend, he's not going to allow Morgan to take him back to face justice.

From that point on, LAST TRAIN FROM GUN HILL generates the same sort of suspense as the original 3:10 FROM YUMA, as Morgan captures Belden's son but has to wait for the 9:00 o'clock train to get him out of town. The stand-off aspect reminded me a little of RIO BRAVO as well. Both of those movies are good company to be in, and LAST TRAIN FROM GUN HILL holds its own with them.

Director John Sturges was still several years away from the films for which he's best known, THE MAGNIFICENT SEVEN and THE GREAT ESCAPE, and LAST TRAIN FROM GUN HILL is much smaller in scope than those movies. Sturges handles it very well, though, keeping things low-key for the most part, which makes the occasional outbursts of brutal violence even more effective.

This also reminded me of what a good old-fashioned movie star Kirk Douglas was. He's great in it, charming in an early lighthearted scene before he finds out what's happened and then grimly determined from then on, effortlessly athletic in doing most of his own stunts, dominating everybody else on screen except when he's working with Anthony Quinn, who is almost as good as the tortured father determined to protect the son he knows he tainted with his own brutality. Even though technically he's the bad guy, the viewer never quite loses every bit of sympathy for Quinn's character. That moral ambiguity works very well with the rest of the movie. 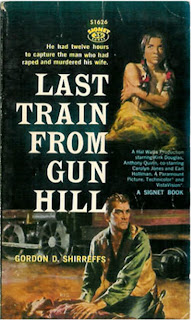 At an hour and a half, LAST TRAIN FROM GUN HILL doesn't waste any time. It's the sort of tough, noir Western that could have easily been a Gold Medal paperback. I really enjoyed it. (Actually, there was a novelization of the movie by the great Gordon D. Shirreffs, but it was published by Signet, not Gold Medal. I've never read it and don't recall ever seeing a copy.)

I bet Bill Crider has a copy.

Yesterday was Kirk Douglas's 97th birthday, by the way.

When I scheduled this post, I didn't realize it would appear so close to Douglas's birthday. That certainly worked out well.

I would never bet against Bill Crider having a copy of a book. Any book.

I read the novel in 2009. Can't remember much about it except that I liked it. It seemed good enough to stand on its own merits, even if there had not been a movie.

Some book dealers expect fancy (fanciful?) prices for the Signet novelization. Fortunately it was reissued by Dorchester as half of a Shirreffs Leisure Books double in 1992. You would enjoy it, James. As you might expect, it's not particularly typical of Shirreffs, but is very much in the Gold Medal vein, as you suggest. It's short, fast-moving, and yes, dark and gritty like the movie. I remember liking it a lot. Thanks for reminding me ... goes to the top of my To Be Re-Read pile!

I liked this one, too, though Quinn's mumbling, faux-Brando acting style never clicked with me. At least he wasn't as bad in this one as he was later in his career. Kirk, on the other hand, was always a great screen presence.

I read the the Leisure books double edition which also features The Border Guidon ,both great reads

I wonder if the fact the novelization was reprinted by Leisure means the copyright was in Shirreffs' name and he controlled the rights. That would never happen now with a novelization, but it used to. I remember some of Mike Avallone's novelizations were copyrighted in his name.

Just for the record! Copyright notice in the Leisure book says: "(based on a screenplay by James Poe and a story by Les Crutchfield) Copyright © MCMLVIII by Hal B. Wallis and Joseph H. Hazen."

I guess Leisure made a deal with the rights-holders, then. Or else reprinted it and hoped nobody noticed. (Such things have been known to happen.)