The Burglar Who Counted the Spoons - Lawrence Block 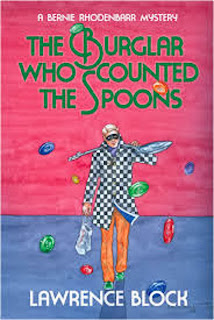 I've been reading Lawrence Block's Burglar books almost as long as I've been reading his Matt Scudder books, and that's quite a while. The latest novel featuring Bernie Rhodenbarr, THE BURGLAR WHO COUNTED THE SPOONS, will be out later this month—Christmas Day, in fact, but you can pre-order it now—and it's a fine addition to the series.

As this one begins, Bernie is hired to steal the original holographic manuscript of F. Scott Fitzgerald's story "The Curious Case of Benjamin Button", with its original title "A Life Lived Backward", from the museum where it's being kept in storage. Bernie's client isn't a Fitzgerald collector, however. He collects buttons, and anything connected to buttons, which later in the book leads to him hiring Bernie again, this time to steal a spoon bearing the likeness of Button Gwinnett, one of the signers of the Declaration of Independence.

While this is going on, Bernie is also hanging around with his friend Carolyn, running his bookstore (which never does much business), ruminating about books and authors and Amazon, and helping one of his other friends (and sometimes nemesis), police detective Ray Kirschmann, with a case where an elderly woman appears to have died of natural causes, but under odd circumstances.

At times the book appears to amble around sort of aimlessly, but I knew better. Everything is there for a reason, and watching Block sort it all out is one of the joys of THE BURGLAR WHO COUNTED THE SPOONS, along with his seemingly effortless prose. All the asides about various books and authors and the publishing business are great fun, too. I stayed up well past my bedtime to finish this novel, which almost never happens these days.

Another thing I should point out is something that most of Block's readers probably won't ever notice. THE BURGLAR WHO COUNTED THE SPOONS contains a very important element that's virtually identical to something in Livia's latest novel, THE FATAL FUNNEL CAKE. I can't say any more without venturing far into the realm of spoilers. Now, I happen to know for a fact that it's physically impossible for either of them to have read the other's book before writing theirs. So this is one of those bizarre coincidences that happen from time to time, and as Ray Kirschmann says in the book, if coincidences didn't happen, we wouldn't have a word for them. However, I prefer to think that it's a prime example of how Great Minds Think Alike.

Those who have already done "best of the year" lists have jumped the gun, since THE BURGLAR WHO COUNTED THE SPOONS belongs on such lists. I had a great time reading it and think most of you probably would, too, so it gets a very high recommendation from me.

I have been a Block fan for years, and have read most all of his stuff. The Burglar books are my favorites. Have pre-ordered this one and can't wait to read. Super post.