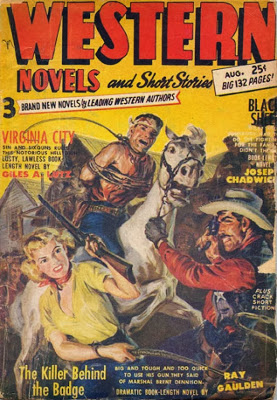 Boy, this cover is packed with action, and I think it's a pretty good bet the stories inside are, too, since the authors include Giles A. Lutz, Joseph Chadwick, Ray Gaulden, Stephen Payne, John Prescott, and Louis L'Amour writing as Jim Mayo. I don't think that's a Norman Saunders cover, but to me it seems to show some Saunders influence.
Posted by James Reasoner at 6:30 AM

James, there's something about that cover that makes me think it is a Saunders. Look at the woman's face, the shape of the uppermost guy's mouth.
Can anyone help?

John, you're absolutely right. I should have checked the Norman Saunders website before I posted that. I didn't think the art looked quite polished enough to be his. Any time I see that much action on a pulp cover, though, he's the first one I think of. He had covers on eight different pulps dated August 1952, and they're all great. That's just amazing.

I've owned several Saunders cover paintings over the years and this does look like his work. I'm down to one painting now that was used as a pulp cover on a western and also reused years later on an Ace Double.