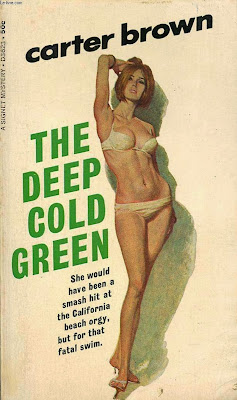 I've seen Robert Barnard's books around for many years but never read any of them. So with this being Robert Barnard Week on Forgotten Books, I gave one a try...then another, and another. I didn't like or finish any of them, so sadly I have to say that Barnard just isn't an author for me. However, I thought that I still ought to read a mystery novel by a British author, and Alan G. Yates was born in England, right?

So that brings us to THE DEEP COLD GREEN, another entry in the long-running series written by Yates (and possibly a few ghosts) under the name Carter Brown. The Carter Brown books feature several different characters, and this one stars the one who's probably my favorite, police lieutenant Al Wheeler. As a bonus, it has a nice McGinnis cover, as most of the Carter Brown books from that era do.

As the book opens, Al is in Reno, Nevada, on his way back to his hometown of Pine City from a vacation. A beautiful redhead named Tracy barges into his room looking for a ride back to Pine City, but hot on her heels are a couple of bruisers who have come to take her back to her husband, professional gambler and casino owner Dane Tenison. They back off when they find out Al is a cop. Al and Tracy leave Reno together, but Tracy promptly disappears after they spend one night together. According to the motel clerk, she left on her own in a rental car, so Al doesn't think there's anything suspicious about her departure.

Back in Pine City, though, a body washes up on the beach a week later, and wouldn't you know it? The dead woman is Tracy Tenison. Or is she? Al quickly discovers that Tracy has a lookalike sister named Louise. It appears that Louise was only pretending to be Tracy back in Reno, because in actuality she was carrying on an affair with her sister's husband.

After that, things start to get a little complicated.

The Carter Brown books don't have much of a reputation anymore, but they usually featured complex plots that provided a genuine challenge for whichever detective was in that book to figure out. Most of the time, they even made sense. This tale involving several beautiful women, a murder frame-up, and the world of professional high-stakes gambling races right along in Yates' smart-alecky prose to an action-packed finale at sea. He even tries to put in a few poetic touches here and there and for the most part succeeds. Al Wheeler is a likable narrator/hero, and I always enjoy his adventures.

THE DEEP COLD GREEN was published in 1968, and it's a little more graphic sexually than the earlier Carter Brown books but not as pornographic as the ones from the Seventies. The whole Swinging Sixties atmosphere makes it read a little like a historical novel now. It's hard to believe more than forty years have passed since then. One thing hasn't changed, though: I read and enjoyed Carter Brown books back in those days, and from time to time I still do. This one's worth checking out if you're a fan and haven't read it yet.
Posted by James Reasoner at 5:30 AM

My father read dozens of the Carter Brown books when I was growing up, as a result of which I read a few myself. My favorite of his series characters was Mavis Seidlitz. The only Al Wheeler title I've read is The Lady is Transparent, and that because it features a locked-room mystery--not the kind of thing you'd expect from Yates.

I read dozens of Carter Brown books as a kid. The McGinnis covers reeled me in. Like you, I enjoyed the Al Wheelers best.

What a great title.

I read a ton of Carter Brown books in the 60s and 70s. Bought 'em for the covers, enjoyed the stories. They're quick and breezy but, as you said, the plots are often very complex. Overall, they're a better body of work than they get credit for ... I remember THE DEEP COLD GREEN because I thought it was a bit better dramatically than some of the others and also due to a good chuckle I got when a buddy of mine couldn't keep straight the titles of all the books I read so voraciously back then. When I offered him my copy of THE DEEP COLD GREEN to read, he said, "Oh, is this by the same guy who wrote THE BROWN PAPER BAG CONTRACT?" (jumbling together three different series --- Al Wheeler, Travis McGee, and Joe Gall --- in that one question). I guess you had to be a reading "nut" like me (or us, if I may include several current peers whom I have discovered over the years went down a very similar path in their formative years) to keep it all straight. But wasn't it grand for those of us who did?

Supposedly all the Carter Browns were written by Yates (at least according to the Yates estate), although Robert Silverberg has stated that he wrote four Carter Brown books for the Meredith Agency. Silverberg was not sure if these books were ever published or, if they were, under what titles.

Jerry,
All the Carter Browns I've read sound like they were written by the same person, but I've seen that about Silverberg, too, and also recall rumors that someone named Ron Brown wrote some of them. They're short enough that Yates certainly could have done all of them, although sometimes the problem isn't the wordage but rather the sheer number of plot ideas that a long-running series requires.

These I've not seen. I'm going to have to track some of them down. For the covers if nothing else.

I read all the US Carter Browns, they all to me seem like they were written by the same person.

I prefer Danny Boyd, and then Rick Holman. I hate Mavis, but did like the Wheeeler/Mavis combo book.

My first Carter Brown was HOUSE OF SORCERY. Great cover!