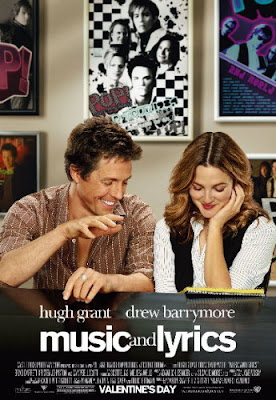 It’s no secret that we watch quite a few romantic comedies around here. MUSIC AND LYRICS is a good one. Hugh Grant plays a washed-up Eighties pop star, half of a Wham!-like duo whose partner goes on to a successful solo career while Grant’s character is reduced to playing state fairs and amusement parks. He gets a comeback chance when a current pop star asks him to write a new song for her, but he needs someone to write lyrics to go with his music. Who better than the eccentric young woman who comes to his apartment to take care of his plants? She’s played by Drew Barrymore, and yes, it’s a “meet cute” scenario, but if you can get past that, the script by Marc Lawrence (who also directed) is smart and funny and contains some nice observations about the nature of creativity, along with clever shots at various aspects of the music business, past and present, and pompous professors turned literary novelists. The music is pretty good, too. Hugh Grant is charming (as usual), Drew Barrymore is cute (as usual), and this is one of those movies set in a clean, friendly, romantic New York City. Not a great film, but one that does exactly what it sets out to do, and I enjoyed it.
Posted by James Reasoner at 12:23 PM

I haven't seen the film(I'm not a big fan of the genre), but I understand what you said. If a film(or book) does what it's supposed to do, that's all you can ask. A lot of people don't get that. Not all films or books can be masterpieces(nor are they intended to be.

I enjoyed it a lot. I especially liked the way they didn't make Big Pop Star a monster. A world-class flake, yes, but she was actually kind of sweet. And the music was by 1/2 of the group Fountains of Wayne (aka the Secret Masters of Pop) so how could you go wrong?

This was a sweet movie and it was lots of fun to watch eighties rock satirized. I don't think too many men other than Hugh Grant could pull it off though.

I'm not much of a Hugh Grant fan, but I thought he was particularly good in this film. In order to be likable he had to manage to be charming and not terribly bitter about the way his career had come. I thought the way he handled things was very honest--no, he wasn't particularly thrilled with his current career, but it beat working for a living, and he seemed to recognize that things could be a lot worse... and that maybe he was his own worst enemy.

I really did think it was a pretty good romantic comedy.